To Live in the House of the Lord: Fr. Joe Tetlow, SJ, Reflects on his Vocation after 75 Years

In my 92nd year, vocation looks different. I think now not “I,” but “we.” That’s not the “royal we” used by kings and popes. What I mean is that the vocation I’ve lived was never merely “mine” but always “ours.”

It is a sign that Christ’s prayer – that they may be one as we are one (John 17:21) – has worked. We are in truth one body. So it seems to me now that I became a Jesuit and a priest not by some unique solitary grace, but rather in the course of things unfolding in God. One of my mother’s older brothers, to start there, was Jesuit Fr. Malcolm Mullen.

My father played football at Loyola University in New Orleans and met my mother there. My first baby picture is a crinkled little face in a white sweater with a big “L” on it. One of my brothers (the father of Tania Tetlow, president once of the same Loyola and now of Fordham University) is named for Fr. Louis Mulry, SJ, who was the pastor of the Jesuit parish on campus. He baptized me at Loyola – and then all four of my siblings.

I went to Jesuit High school, at the time the only U.S. Marine Corps Junior ROTC in the country. My brothers followed me. The only question when I was a senior was whether I’d join the Marine Corps. Ironically, that was settled when we seniors were shipped to Manresa House of Retreats in Convent, La., to make a silent retreat. A Jesuit Navy chaplain preached at us. At some point, I thought, “Dang! (or something like that), I have to be Jesuit!”

I could say I never looked back, but that would ignore some dark stretches, like when I wasn’t sure I believed in God. Anyhow, I learned by experience that we choose to be who God wants us to be not once, but again and again.

One of the great graces early in my life came in prayer when I was desolate, harping on “me.” I was suddenly praying a scripture about love your brothers. I saw a light: I can do that. And that’s been my vocation: I live with brothers. We are Companions of Jesus – and being companions is being about one another’s business. So I am about Jesus Christ’s business along with brothers on five continents, living our way of proceeding.

There have been hurdles. I’ve been called to teach what I hadn’t studied and preside over a theologate in a delicately ecumenical union. I’ve been the book review editor for America Magazine, the tertian instructor for international groupings of Jesuits and on the staff of the Jesuit Curia. It’s the Jesuit way. We study a long time so we can unleash talents when the Church in our place needs them. But it makes for a lot of hairy work.

What kept me faithful (given God’s grace and Jesus’ friendship) was the men of the Company. The older men were first, and I wish I could list them because at each juncture, one of them was there to steady me. I revere deeply the line I stand in. Then my closest peers: Fr. Vicente Rodriguez, a Cuban accidently shot by a U.S. Marine in Santo Domingo, Frs. Pat Phillips and Don Gelpi, and others. I have grieved losing each of them.

As time passed, lay colleagues surprised – amazed – me by caring for me and letting me walk with them. Several became friends like Jesus’ friends: Mary Mondello, Joe Lipic, Mary Jolley, Bill Durbin. They have made me who I am and all of them make this vocation “ours.” I don’t know how else to say it.

For our great challenge is learning that we are unique and unrepeatable individuals – and yet, members one of another. With the whole Church, we Jesuits have had to work through that conundrum, intensely at times. We discovered that we American Jesuits are steeped in a culture that is secular, gnostic, pleasure-mad and individualistic. I found it a bitter lesson to learn, but ignoring that gift and burden left a lot of wreckage.

In my lifetime, the Roman Catholic Church has had to change or die. My ordination class (1960) celebrated Mass – and baptism, matrimony and reconciliation – all in Latin for years. It had stopped being useful, and the Holy Spirit led the change. So, from our culture and our Church, challenges have been strong, subtle and unrelenting. A lot of us didn’t make it through but left to serve the Lord (I hope and pray) in other ways.

I made it to where I am now, I am convinced, because of prayer – mine, of course, but also my mother’s and many others’. I was very fortunate in my father. I was not sure until he lay dying that he thought my being a Jesuit the better thing. But then, and at two other crucial junctures, my father gave me a strong hug and a couple of words. I will die wanting and missing my father, who is with my Father.

The one thing I asked a long time ago, to live in the house of the Lord all the days of my life, has been given me by our most gracious God. For me and the seven men I live with, that’s the daily surprise of our vocation. 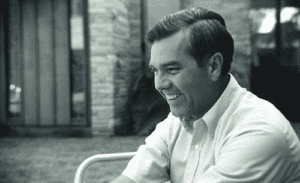 Thanks to the Jesuit Archives & Research Center for the photos from Fr. Tetlow’s early life as a Jesuit.