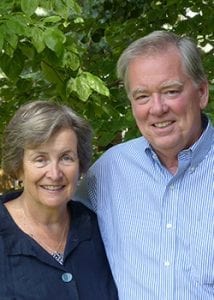 Tom Auffenberg tells an amusing tale of the day he retired. It happened to coincide with his annual physical. He casually mentioned to his physician that this was his last day of work. He was told to sit down; the visit wasn’t over. “Here is my advice for newly retired men,” his doctor said. “The happiest retirees I know spend at least four hours each day outside the home engaged in activities separate from their spouse.”

When Tom recounted the story to Dale, his wife of 37 years, they had a good laugh. Not only is the idea amusing, but the fact is, Tom and Dale are involved with so many good works that they often go a day or two with little time together.

This commitment to philanthropy and helping others began long before Tom retired as president of Modern Litho (formerly Midtown Printing), a printing company in St. Louis. Both Tom and Dale have volunteered for years. When their four children were young, they focused on school and related activities. Dale served on the Mother’s Club at St. Louis University High School and even took a turn as club president. Tom is a long-time board member of Loyola Academy, the Jesuit middle school for low-income students in St. Louis.

As their children grew and started families of their own, Tom and Dale increased their volunteer endeavors. As alums of Santa Clara University, both have long-standing ties to the Jesuits. Tom, for instance has made an annual retreat at White House Jesuit Retreat in St. Louis every year since 1987. Because of these connections, various Jesuit institutions are among the beneficiaries of the Auffenbergs’ time.

Tom and Dale are founding members of the Ignatian Volunteer Corps (IVC) in St. Louis, now in its 11th year, and they continue to volunteer. The IVC provides mature men and women opportunities to serve others and transform lives. IVC matches the talents of experienced volunteers with the greatest social needs of the community.

“Dale and Tom exhibit all the traits you could hope for in volunteers,” said Vicki Simon, director of the Ignatian Volunteer Corps. “What I most admire about them is their purity of spirit. Their only motivation in volunteering is their passion for the cause and a desire to do good.”

Tom’s retirement served as the genesis for his most recent Ignatian undertaking, The Next Chapter, offered through Saint Louis University’s Office of Mission and Identity. Tom and his colleagues Chris Collins, SJ; Don Eggleston and Marian Love will work with men and women approaching the end of their working careers to help them discern God’s call for their “next chapter.” The six-month program will offer guidance from Jesuits, Saint Louis University faculty and other experts, all in the Ignatian tradition.

To help adults just starting their professional careers, Tom also recently established the Contemplative Leaders in Action (CLA) program in St. Louis. Rooted in the teachings of St. Ignatius Loyola, CLA is a two-year faith formation program and leadership development program for young adults, 25 to 35 years old. The program nurtures individual growth and strives to develop leaders who can bring the dynamics of faith and justice to their families, co-workers and communities.

Dale, too, devotes time to Jesuit causes. She recently joined the Belize 2020 committee. Belize 2020 is a joint effort between American and Belizean volunteers. Their mission is to improve the lives of the people living on the south side of Belize City, near the Jesuit Parish of St. Martin De Porres.

She also mentors clients at Our Lady’s Inn, a shelter for pregnant women and their children. These vulnerable families are sheltered and supported in their efforts to live healthy and productive lives, achieve goals, gain employment and secure stable housing. The program offers a life affirming-alternative to abortion.

Tom and Dale share a concern for the underserved and a desire for social justice. It is what drives Tom to provide prison ministry through Criminal Justice Ministry-St. Louis.

The L’Arche community in St. Louis is especially significant to Tom and Dale. L’Arche is an International federation dedicated to the creation of homes, programs and support networks for people who have intellectual disabilities. Tom’s brother, Joe, was born with an intellectual disability, and the entire Auffenberg family has long recognized the impact of programs that help the special needs community. Joe Auffenberg died in a tragic accident in 2014, but Tom and Dale have never wavered in their support.

“Tom and Dale were there in June 2011 when L’Arche St. Louis opened our first home as the 17th L’Arche community in the United States,” said Father Kevin Cullen, SJ, Central Regional Leader of L’Arche. “They have been an integral part of the effort from day one. They have helped with everything from strategic planning, to feeding folks with casseroles, to providing major gifts!”

With all the volunteer work they do, Dale and Tom remain focused on their family. They maintain a hard and fast rule that while they willingly give 10 months a year to their favorite causes, they reserve July and August for the family, which now includes five grandchildren. Dale was born and raised in Missoula, Montana. When it was time for college, her father had only one rule: whatever college she attended had to be a Jesuit institution. Dale selected Santa Clara University, where she met a young man from St. Louis.

They dated for two years in college, but following graduation, they both had plans for their post-college years. Dale joined the Jesuit Volunteers, teaching in an inner-city school in Portland, Oregon. She then attended the University of Oregon to get a degree in counseling. Tom became a high school teacher at Jesuit High in Sacramento and then returned to St. Louis to teach at De Smet Jesuit High School for a year before deciding to attend law school at Saint Louis University. They remained close friends during that time, and in the summer of 1979, they decided to live in the same city to give their relationship a chance to grow. They were married in August 1980, when Tom finished law school.

You might think that with all their charitable works and family time, Tom and Dale have no time for other interests. Not so. They like walking through various parks, reading, live theater, travel and golf. Tom plays golf as often as he can, and Dale loves to join him for nine holes once or twice a week – which allows them to still follow the four-hour rule!

John Fitzpatrick is the provincial assistant for advancement for the USA Central and Southern Province.