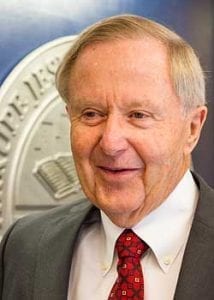 Dick Campbell has done things the hard way, which might explain why the Central and Southern Province founder has tried to make things easier for others.

He did four years of night law school so he could work by day to support his family. What the night-school law degree lacked in prestige gave him the legal chops to launch his own successful firm in Denver. He’d already had an FBI career in intelligence and espionage tracking Russians and Chinese during the Cold War as well as New Left activists, educators and agitators in the 1960s and ‘70s.

It was an unlikely destination for a poor kid in Denver whose father, he said, had abandoned his mother, “never gave her a dime and showed up in seven- to 11-year intervals.” His mother wanted Dick and his older brother Dan to attend Regis Jesuit High School, but her income from a job with the phone company barely covered household expenses.

“I still remember sitting in his office,” he said of his and Dan’s meeting with their mother and the then-president of Regis High School and College, Fr. Raphael McCarthy. “Tuition was probably $45 or $90 a year then. My mom said, ‘I don’t have it.’ Fr. McCarthy said, ‘Merial, pay what you can.’

“There were no forms to fill out, no financial aid. She probably paid the Jesuits $10 a year in tuition. The Jesuits have been very good to us.”

The brothers tried to quit school every year, but their mother, Campbell said, kept encouraging them to “do it one more year.”

“As I grew older, I appreciated what impact (the Jesuits) were having on my life,” Campbell said.

He’s been making it up to them ever since.

In the late 1980s, Richard Campbell was the managing partner of a development company that owned vacant land in the fast-growing Denver suburb of Aurora that now is Colorado’s third most-populous city.

At the time, Regis Jesuit High School shared a campus and identity with Regis College (now university) in Denver. But some, including then-President Fr. Ralph Houlihan, felt the high school needed to break from its big brother and establish itself as an independent entity, just as 25 other Jesuit high schools in the U.S. had done before Regis.

“We were on 90 acres with the college and the college’s plans were encroaching on the high school,” Houlihan said. “We needed to establish our own identity . . . It just wasn’t a healthy situation.”

The idea for a new high school campus became more possible when Regis College offered to buy the Regis high school building on their joint campus.

Metropolitan Denver was growing east and south of the city, and Campbell and his partners just happened to have 30 acres that he knew would blossom with commercial development and housing. Campbell, chairman of the Regis Board of Trustees at the time, talked to his partners who agreed the partnership would donate the land to Regis for a new high school in Aurora.

The new Regis Jesuit High School opened in September 1990, and seven years later, Regis bought an adjoining 35-acre parcel. By 2004, Regis Jesuit had a boys and girls division, side-by-side on what became the Campbell Campus.

For his generosity in donating land, and for his business advice, Campbell was named a “founder” of the Central and Southern Province in 1991, a rare designation Houlihan had pushed for, and that Father General Peter Hans Kolvenbach approved. Campbell is the province’s only living founder. Five preceded him.

The Jesuits’ Central and Southern Province archives in St. Louis are bereft of anything about Campbell except for a letter Houlihan wrote to then-Provincial Robert Costello on Dec. 19, 1988. It says in part that Campbell “. . . has steadfastly refused any recognition for himself or his family for his gift of the land, but I know he would be touched and deeply appreciative of our prayers should Father General decide to make him a founder of the province.”

Campbell is grateful for the prayers to this day and said it’s been “a great grace” and a gift to collaborate in ministries with the Jesuits.

Regis Jesuit’s move to the suburbs was controversial and very upsetting to alumni and others loyal to the century-old fixture in north Denver. But enrollment was declining, and many believed the area couldn’t support the school as alumni families migrated out of the city. Today, Regis Jesuit is thriving, and that “never would have happened if it had stayed in its former location,” Campbell said.

Still, Regis Jesuit’s move from the city, and the Archdiocese of Denver’s closure and relocation of its urban schools, left a hole that Campbell felt obligated to fill.

He believed the church owed Catholic educational opportunities to the urban poor, as he and his brother once had been, and said that lay people have an obligation “to keep programs for the poor running.”

In the late 1980s, Campbell approached Houlihan about whether it was feasible to establish a Catholic high school of some kind in Denver’s inner city. Over the next several months, Houlihan, who was then teaching at St. Louis University High School, traveled to Denver on his non-teaching days to work with Campbell on a feasibility study. When complete, the study was inconclusive, and the effort stalled.

Campbell called then-Jesuit Provincial Frank Reale to thank him for making Houlihan available and to say he had tabled the idea of an inner-city Catholic high school. But Reale surprised him by saying the Jesuits remained interested. Campbell arranged for Reale to meet with then-Archbishop Charles Chaput, and the seed for a Catholic high school was planted.

Two archbishops, a mountain of hurdles, and a second feasibility study later, Campbell had amassed enough momentum that a “breakfast club” of Jesuits and committed lay people met at 7:30 a.m. in his office at frequent intervals for three to four years to launch what would become Arrupe Jesuit, a college-preparatory high school for Denver’s economically disadvantaged kids. The school takes its name from the Jesuits’ late superior general, Pedro Arrupe, who led them to more deeply commit to justice and the poor.

The Jesuits of the Central and Southern Province sponsor Arrupe, which turns 10 next year, but Campbell founded it, put together its board and got the Jesuits to run it, Houlihan said.

Arrupe, part of a network of similarly structured Cristo Rey schools across the country, allows students to help meet the cost of their tuition by working at local businesses that partner with the school.

“He was absolutely passionate about getting the school opened, his faith and commitment, and being a man for others,” Arrupe president Fr. Timothy McMahon said.

Fr. Philip Steele, president of Regis Jesuit High School, said Campbell is an unassuming man of deep faith who has felt a genuine partnership with the Jesuits.

“He’s very comfortable in Jesuit circles and in synch” with Jesuit ideals of promoting justice and working with the poor, he said.

Today, Campbell sits on the board of many charitable organizations in Denver and has helped raise money for programs that benefit the inner city and the poorest areas of the world.

A school like Arrupe might never have opened in Denver if it wasn’t for Campbell’s persistence. But try to convince him of that.

“I don’t take credit,” he said. “You do what you do. Christ was there before you got there. You wouldn’t have done it otherwise. It’s really the hand of God.”