Giving Back to Those Who Laid the Foundation for His Success 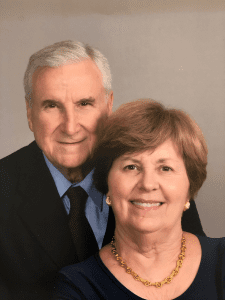 The Jesuits have been part of Dr. Francis Horaist’s life for as long as he can remember. They laid the spiritual foundation for his life, had a hand in his education and blessed him with many friendships. His sustained giving to the Jesuits USA Central and Southern Province is one way for him to show his appreciation for all the Jesuits have given him.

Growing up in southwest Louisiana, Dr. Horaist attended then-Sacred Heart Church (now St. Charles Borromeo) in Grand Coteau. As an altar server, he got to know many Jesuit scholastics, who oversaw the program. His early encounters made a lasting impression.

“The scholastics and the Jesuit priests and brothers were all so smart and I came to admire them very much,” Dr. Horaist said. “They made you feel good to be around them.”

Along the way, he befriended several of them, including Fr. John Keller, SJ, and Fr. Thomas Clancy, SJ, who eventually served as provincial of the former New Orleans Province from 1971 to 1977.

Perhaps the most influential Jesuit in Dr. Horaist’s life was Fr. Griswold Whipple, SJ, who served as assistant pastor at Sacred Heart parish from 1942-46.

Upon his return to southwest Louisiana in 1974, Dr. Horaist began to practice orthodontics and married Doris Smith four years later. After running a successful practice for many years and achieving financial success in the stock market, Dr. Horaist found himself in a position to “give back.” He wanted to contribute to the Jesuits because of their formative role – spiritually, socially and educationally – in his successful life.

For many years, he has supported the ministries and works of the province, helping fund care for senior Jesuits at the province’s two pavilions, as well as the ministry of Fr. Charles Thibodeaux, SJ, who served for many years as a missionary in Paraguay.

Dr. Horaist has now been retired for 16 years and enjoys spending time with his two grandchildren. His three adult children all followed in his footsteps in the medical field. His two sons are doctors and his daughter is a nurse.

When Pope Francis was appointed Pope several years ago, Dr. Horaist felt that “one of our own” was leading the church. Indeed, his gratitude to the Jesuits for their formative role in his life continues, as he admires all in the Society and continues his generous giving to this day.