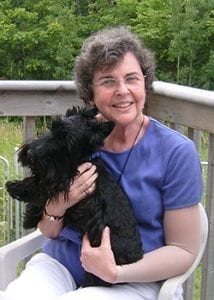 Mary Hartson Arroyo started life as the adorable dark-haired daughter of a New Orleans beauty and her Annapolis-graduated, naval officer husband. In pictures, she wears a big smile and Shirley Temple curls, playing with a dog or holding baby brother, Ted, eight years her junior. At the end of her life, on Feb. 23, 2015, at age 79, this social worker-turned-spiritual director from New Orleans, surprised her brother Ted by leaving $1.2 million to the Jesuits.

Mary Arroyo was the older sister and only sibling of Father Edward “Ted” Arroyo, SJ, who wasn’t aware of her plans for wealth inherited from their parents.

“I never talked to Mary about where her estate would go,” Fr. Arroyo said. “I was kind of surprised.”

It was less of a surprise to Mary’s friend, Sister Dorothy Trosclair, OP. The Dominican Sister of Peace directs the archdiocesan Spirituality Center in New Orleans where Mary initially volunteered, then worked as a spiritual director and trainer of others, until her illness made it impossible for her to continue. She says that in addition to having a brother who is a Jesuit, Mary was trained in Ignatian spiritual direction and loved Ignatian spirituality as a pathway to God, and she directed others in it.

Father Arroyo said he’s “pretty sure Mary would have been reluctant, hesitant, even resistant to having an article written about her in the first place.” But another Dominican Sister of Peace, Noel Toomey, who hired Mary at the archdiocesan spirituality center, and became a close friend, said: “If anyone deserves recognition, it is Mary Arroyo, who was the most wise, simple and humble and holy of women.”

None of that wisdom and holiness came easily, however.

Old, black-and-white family photos show a nearly unrecognizable time in America, when Mary and her young parents, Edward Benjamin Arroyo, Sr., and Lillian Hartson Arroyo, enjoyed road trips out West, lived in a Hawaii several years before and during the attack on Pearl Harbor, and later moved with toddler Ted to Ecuador, where Navy officer Edward helped direct that country’s Naval Academy to protect the Galapagos Islands from the Japanese in World War II.

Between the Arroyo family’s many travels, its anchor was always New Orleans and its web of many close aunts, uncles, cousins and grandparents who took care of each other in difficult times.

Mary Arroyo and her cousin, Mary “Melsy” Saunders, born exactly three months apart in 1935, lived with their respective parents in their grandparents’ house in New Orleans during part of the Great Depression. “We were brought home to the same place after birth; we were almost like sisters even at that point,” Mrs. Saunders said. They went to grade school, high school and college together and remained life-long confidantes and friends.

When Mary and Ted’s mother struggled with breast cancer in a “long dying” that ended her life in 1951, the children lived with extended family to protect them from their mother’s suffering.

But young Mary, then 15, felt the pain of being excluded from her mother’s dying and felt unrooted in those years, said Sister Lea Joanisse, CSJ, a close friend who came to know Mary many years later when they worked toward their master’s degree in Christian spirituality at Creighton University. “It was a core injury in her,” she said. “Her mother was only 49, her father lived away, and she was under the care of an aunt and grandmother. It was a very painful time.”

Mary would go on to university studies at Loyola and Tulane, where she earned a master’s degree in social work before moving to California with friends. She entered the novitiate of the Cenacle Sisters, but the vocation didn’t stick. Instead, she pursued a life in social work, managing cases of poor, sick children for the state of Louisiana. She retired from that work in her 40s when she faced her own years-long battle with breast and bone cancer. She would go on to live another 30 years, time that allowed her to discover and live the vocation she was meant to have.

“She was a miracle,” her cousin, Melsy Saunders said. “God had this next journey for her. It was what God put her here for.”

Sister Joanisse recalled that Mary was “on fire” for spiritual direction, and after studies at Creighton, the two friends co-directed retreats for laity in Canada before Mary joined the Archdiocese of New Orleans’ Spirituality Center as an Ignatian spiritual director who also co-taught and supervised the training of other spiritual directors.

She is remembered as an exceptional, deep listener, who put her social work skills to use in spiritual direction.

“She was so open to suffering in other people,” Sister Joanisse said. “I never met anyone who communicated so effectively with empathy. She heard the deeper story. She heard beyond the words.”

She became very accomplished in her work until Hurricane Katrina in 2005 uprooted and traumatized her, and not long after, dementia made her less and less herself before eventually taking her.

When Mary began showing early signs of memory loss, a cousin who practices law saw the urgency of formalizing Mary’s wishes in her estate plan while she was still able to articulate them.

“Most of us will make it to the finish line with (financial assets) left over,” he said. “During our lives most of us won’t have the ability to make six-figure donations but through a planned-giving vehicle or a bequest, we can make a significant contribution. It may not be of the magnitude of Mary Arroyo but significant just the same.”

Gifts made via a will or other planned-gift vehicle likely will be the largest donation any one donor makes, he added.

“And Mary Arroyo managed to make the single largest donation the Jesuits of the USA Central and Southern Province received in 2016.”

In Mary’s final days, her brother, Melsy, Sister Lea and Mary’s brother, Fr. Ted, took turns keeping watch over her in her room. Melsy, who grew up with Mary, held her cousin-sister her last day of life in bed. “It was such a gift for me,” she said.