A Family Invested in Jesuit Mission and Ministry

Editor’s note: This profile of our dear friends the Luchis was written prior to Jean’s death in 2019. 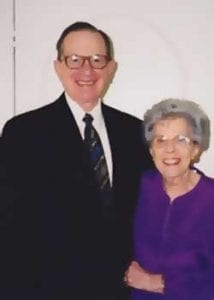 When the late Robert J. Luchi joined the Society of Jesus in 1983, his parents, and later his siblings, began to identify and ally themselves with the Jesuits in a relationship that persists today, five years after he died of esophageal cancer at age 52.

Consistent donors to the Jesuits, Robert and Jean Luchi support a number of projects and people, including a leadership gift that enabled the Central and Southern Province in 2010-11 to renovate and expand Fusz Pavilion, a skilled nursing facility in St. Louis for aged and infirm Jesuits, where Fr. Luchi died on June 22, 2007.

“They’re not just donors, they are fully invested in the mission and ministry of the Jesuits,” said Thom Digman, assistant to the provincial for advancement.

The family also maintains and builds on the relationships their son and brother began years ago. It’s a way of keeping him close to their heart.

“Our family has an open door to the Jesuits,” said Jean Luchi, a retired pediatrician in Seattle and Luchi’s younger sister. “Maybe the greater gift is that we are a family that welcomes Jesuits. Our prayers and love for them are constant.”

Luchi, who, as a young man, questioned his belief in God and went on to study Sanskrit and the classics at California and Texas universities, joined the Jesuits after an inner voice cautioned, “‘if you do not serve me, you will have wasted your life,’” recalled his father, Robert Luchi, a retired physician and professor of internal medicine and geriatrics at Baylor College of Medicine in Houston.

Dr. Luchi and his wife, originally from Pennsylvania, started their family in Okinawa, Japan, and later settled in Philadelphia.

The Luchis moved to Houston for the opportunity at Baylor, when Bob Luchi Jr. was in high school. The couple remained in Houston until 2008 when they moved to the Kansas City suburb of Mission, Kan., near their younger son, Michael Luchi, an infectious disease specialist at Kansas University Medical Center. A second daughter, Lauren Luchi, is associate director for the American Federation of Teachers in Washington D.C.

Luchi entered the novitiate in Denver and went on to serve tough but rewarding assignments in East St. Louis, Ill., Honduras and Nigeria. When Superior General Peter-Hans Kolvenbach asked for volunteers to help the Society rebuild its work in Rwanda following the 1994 genocide, Luchi responded generously.

But his mission there, from 2001 to ’03, proved difficult and he never quite adjusted to the culture or his assignment, said Fr. Stephen Yavorsky, who served in Rwanda for six years and works in Ignatian spirituality.

“We both wanted to give directed retreats … but they were not into private conferences,” he said. “They wanted preached retreats, which required a much higher level of language development than we had. Bob’s French was better than mine.”

Luchi returned to the States and pursued graduate studies at Weston Jesuit School of Theology at Cambridge, Mass. In 2005, he learned he had advanced cancer. Luchi spent the next six months in Houston, where his father could advocate for his care.

The following year, Luchi came back to St. Louis, where he received an unfavorable diagnosis and opted for hospice. He spent his final months in residence at Jesuit Hall and the Pavilion.

Yavorsky said his friend accepted his fate in true Jesuit spirit, determined to serve God through the “gift of sickness.”

Jean Luchi moved to St. Louis to be with her brother and was given a guest room on the sixth floor of Jesuit Hall where she lived from September 2006 until her brother’s death the following June.

The Jesuits “were extremely generous,” she said. “They were wonderful. I had my meals there, did our laundry there, got to know the dining hall staff. The Jesuits were like spiritual brothers and fathers to me … It was a transformative experience of God’s love. When I left, I felt I was leaving a family.”

Fr. Luchi’s parents and other siblings visited frequently, meeting people who shared stories that filled in parts of the priest’s life that he had kept to himself, Dr. Luchi said.

“He was introverted but could be the life of the party with the right type of people,” Dr. Luchi said. “He could skewer his father and siblings, but not his mother. He would not do that to his mom. He was born in a Quonset hut in Okinawa, special to all of us.”

The Luchis have “adopted” Rwandan Jesuit Fr. Jean Baptiste Ganza, who had befriended their son and brother in Rwanda, and they support his efforts to build St. Ignatius High School in Kigali, the capital.

Last year, they sent money to Jesuit Fr. Pierre Loua as he fled political unrest in Ivory Coast. They came to know Loua in 2007 when he was in graduate school and living at Jesuit Hall.

In January, the Luchis hosted 15 novices from the Central and Southern Province at their home when Ganza was in town for a visit.

Robert and Jean Luchi are regular, generous contributors to the Jesuits of the Central and Southern Province and The Robert E. Manning S.J. Fund in honor of the former Weston president and New England provincial, who died a year after his friend, Luchi. The fund provides financial assistance to graduate students enrolled in the School of Theology and Ministry at Boston College (formerly Weston Jesuit).

The Luchis said they give the Jesuits their love, prayers, affection and solidarity in exchange for the many “great gifts” the Jesuits have given them. And while they did not give their son and brother to the Jesuits, they delighted in his choice, and support the religious order that formed him into the priest he became.

Jean Luchi recalled one night when her brother was especially sick and afraid to be alone.

“What is your prayer?” Jean asked him.

“He said (he prayed) that God’s grace will be manifest through his illness, and I think his prayers were answered,” she said.

“We were given so much love and received so much support. I look back at that time as very rich in God’s grace … with bonds built through sadness of illness and loss, and new gifts of love and friendship.

“My brother continues to live. God’s grace was answered.”