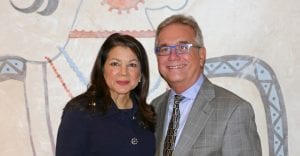 Many people can attest that Ignatian retreats with the Jesuits can be life–altering. Steve Barbas is certainly one of those people. It was during a retreat at Grand Coteau while in law school that he came to the decision to ask the love of his life to marry him. Thankfully, Schezy Luque said yes, and together they have been blessed to be a part a family and community in which the greater glory of God shines brightly, in no small part because of their presence.

A Tampa native, Mr. Barbas was Jesuit educated in his high school years and later at Loyola University’s College of Law in New Orleans. He returned to his hometown after graduation and soon helped found a successful law firm which has grown to serve clients throughout Florida. A grateful man with an easygoing nature, Mr. Barbas has a long record of generously giving back to the Jesuits and their works with his time, talent and treasure.

“I owe the Jesuits a debt of gratitude for playing so many important roles in my life,” he said. “In order for their good work to continue, it’s important to support the province in the formation of our new Jesuits and as well as in the care of our older Jesuits who, in retirement, need our care and support.”