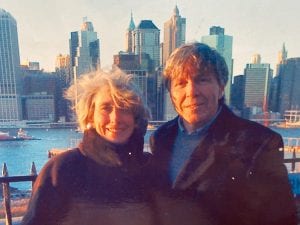 Influence, Inspire, Ignite. These words, found on banners which line the beautiful Avenue of the Oaks on the campus of Spring Hill College, succinctly describe the effect the Jesuits have had on the lives of Edward (‘Skeeter’) and Stephanie Morris of Mobile, Ala., benefactors of the province since 1986.

Mrs. Morris’ journey with the Jesuits began in her childhood with her father’s professorship at Spring Hill College. It was therefore natural that her marriage to Mr. Morris would one day be joyfully celebrated in the golden light of St. Joseph’s Chapel on the same campus. In the 50 years since, the Morrises have been blessed with six children, many grandchildren and an even larger Jesuit family.

One of the more profound Jesuit influences for Mr. Morris has grown from a small starting seed. After offering to help put together a weekend retreat for men over 30 years ago, he found himself permanently appointed coordinator for what has since become an eagerly anticipated annual gathering for men in Mobile. The tradition has woven many faithful Jesuit guides into the fabric of his life, his prayer and his thought process.

Always active at Spring Hill, the Morrises have been particularly inspired by the students of the Sodality, who they say “are on fire to bring encouragement to our world” as a result of their deep Jesuit formation. The couple’s relaxed home hidden away on a wooded lot on Mobile Bay is a favorite gathering spot for the young sodalists at all times of the year.

“We will be forever grateful for the Jesuit witnesses who have influenced our lives,” Mr. Morris said. “As beneficiaries of their lasting bequeath, we want to support their mission of seeking God’s will in all things.”