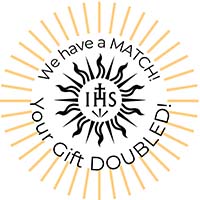 Support the Future of the Society of Jesus

Friends of the Jesuits USA Central and Southern (UCS) Province will support the formation of Jesuits when they donate to the province on Giving Tuesday this year.

Giving Tuesday is the designation for the Tuesday immediately following Thanksgiving. It is recognized as one of the most generous giving days for nonprofit organizations across the United States. This year, Giving Tuesday falls on November 29. All donations made on Nov. 29, 2022 will go to support men in formation in the UCS Province.

“Formation” is the broad term used for Jesuit training that includes higher education, experiential learning and personal growth – a time for building the skills necessary for a successful active ministry as a Jesuit priest or brother. Jesuits typically spend between ten and 13 years in formation, from entrance to the novitiate until final vows.

The average cost to the province for each Jesuit’s formation exceeds $450,000. There are currently about 60 men in formation in the Jesuits USA Central and Southern Province.

Formation is more than just a necessary expense; it is an investment in the future of the Church and the Society of Jesus. Please consider a gift on Giving Tuesday. You can donate online below or send a check to Jesuits USA Central and Southern Province, 4511 West Pine Blvd., St. Louis, MO 63108.

If you think you might be called to a life of prayer, service and community as a Jesuit, we invite you to explore BeAJesuit.org.