Here’s a video of Aric sharing what he loves about his Jesuit vocation, followed by a profile piece.

It All Points to God

Aric Serrano, SJ, appreciates deep thinkers who integrate their intellectual, artistic and spiritual lives. “When the mind, body and spirit are working together,” he noted, “it’s the human person fully alive.”

In his current assignment as a third-year regent at Regis Jesuit High School in Aurora, Colo., Serrano embodies this balance.

He juggles prep work, planning and grading with a ministry of presence. “I like to be with people. I make it a point of walking around the hallways. I’ve learned that you have to be out there, not just sitting behind a computer screen at your desk.”

Serrano has learned that his role in the school is not all about teaching. “To have meaningful conversations about their struggles and what they hope for is wonderful,” Serrano said. “Fostering community and ultimately, hopefully, drawing people closer to Jesus is my main ministry, and the one I find most transformative.”

The oldest of 13 children, Serrano grew up Catholic in New Mexico. His family prayed the rosary together a few times a week. He didn’t know any Jesuits growing up, except through a children’s book of saints. He was struck by how Saints Ignatius and Francis Xavier lived their lives.

Serrano’s personal connection to the Jesuits came through his aunt, a cloistered Carmelite nun with whom he exchanged letters. When asked if she knew any Jesuits, Sr. Tracy of the Eternal Father mentioned to her nephew that her spiritual director at the time happened to be a Jesuit.

Driven by curiosity, Serrano began visiting Jesuit novitiates. In 2007, he made his first discernment retreat, contemplating his vocation through silence over the scriptures.

Sharing a meal at the Jesuit novitiate in St. Paul, Minn., “I realized these are honest, real, simple, holy guys.” The curiosity that was piqued as a child reading about Jesuit saints continued to compel him: “I only had one dinner with those novices, but that had a really profound effect on me, and it made me want to enquire more.”

After stays with Jesuits in Albuquerque, N.M., and New Orleans and graduation with a degree in music education from Eastern New Mexico University, Serrano entered the Jesuit novitiate in Grand Coteau, La., in 2012.

His current role as a theology and music teacher suits him. In high school, he imagined he’d like to be a music teacher of some sort because his experience in band was so impactful. “I love making music in that kind of community, friends that come together and create music that has real meaning.”

Art also informs his faith life. “I find God in the beauty of well-crafted, well-made works of art. Especially with music, I have had some of my most profound experiences of prayer.”

To those discerning their own path, his advice is simple: “Find a good spiritual director. Pray a lot. Sit in silence, and trust that the Holy Spirit is going to lead you and guide you.”

Silence and music alike can be “disarming,” he noted. “Simply being—that prepares the soul for contemplation.”

For Serrano, the act of “gazing on truth and on beauty is one of the most fulfilling things in life; it all points to God.” 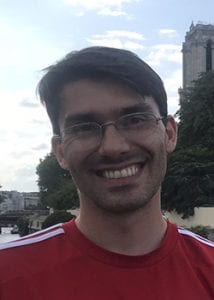 “I find God in the beauty of well-crafted, well-made works of art. Especially with music, I have had some of my most profound experiences of prayer.”