Committed to Educating the Whole Person 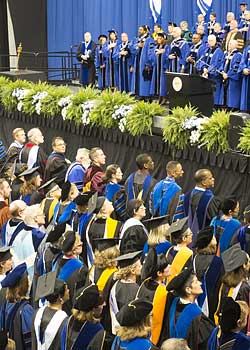 Jesuits of the U.S. Central and Southern Province are involved in education at several levels. The province sponsors four universities, two colleges, 12 high schools and two middle schools. These enterprises share a common sense of mission that is in continuity with the historical evolution of the Ignatian charism dating back to 1551 when the Roman College opened its doors. These schools respect the reality of being both Catholic and Jesuit-sponsored works, and they rely, perhaps as never before, on the collaborative talents and energies of Jesuits and their partners.

On the 200th anniversary of Jesuit education in the United States, Fr. Peter-Hans Kolvenbach, then Superior General of the Society of Jesus, described the purpose of Jesuit Education:

“Our purpose in education, then, is to form men and women for others. The Society of Jesus has always sought to imbue students with values that transcend the goals of money, fame, and success. We want graduates who will be leaders concerned about society and the world in which they live. We want graduates who desire to eliminate hunger and conflict in the world and who are sensitive to the need for more equitable distribution of the world’s goods. We want graduates who seek to end sexual and social discrimination and who are eager to share their faith with others. In short, we want our graduates to be leaders-in-service. That has been the goal of Jesuit education since the sixteenth century. It remains so today.”

St. John’s College
Belize City, Belize
St. John's College is a high school and junior college in Belize City, Belize.
Ministries
Saint Louis University
St. Louis, MO
The mission of Saint Louis University is the pursuit of truth for the greater glory of God and for the service of humanity.
Ministries
Rockhurst University
Kansas City, MO
Rockhurst University (founded in 1910) is a comprehensive university and a supportive community that forms lifelong learners in the Catholic, Jesuit, liberal arts tradition who engage with the complexities of our world and serve others as compassionate, thoughtful leaders.
Ministries
Regis University
Denver, CO
Regis University, inspired by its Jesuit Catholic heritage, has been committed to academic excellence, personal development and community engagement since its founding in 1877.
Ministries
Loyola University New Orleans
New Orleans, LA
Founded in 1912, Loyola University New Orleans is located in America’s most interesting city – the birthplace of jazz – and is the only Jesuit university in America that offers a College of Music and Fine Arts.
Ministries
Spring Hill College
Mobile, AL
Founded in 1830 and rooted in its Jesuit, Catholic heritage, Spring Hill College forms students to become responsible leaders in learning, faith, justice and service.
Ministries