The various elements of Jesuit training emerge from the experiences and life of St. Ignatius Loyola. The length of Jesuit formation is approximately 11 years; it varies depending on one’s background and course of studies.

The first stage is a two-year novitiate where the novice learns about life in the Society of Jesus and begins to live vows of poverty, chastity and obedience in a community setting. The heart of the novitiate experience is making the Spiritual Exercises, a 30-day individually directed retreat. Novices will also engage in a variety of “experiments,” such as serving the poor, visiting the elderly, caring for the sick, and teaching catechism. Near the end of the two years, the novice and his superiors will discern whether he is called to perpetual vows of poverty, chastity and obedience as a Jesuit scholastic who will prepare for priestly ordination or a Jesuit brother who will serve in non-ordained ministry.

Having pronounced his vows, a Jesuit begins a three-year period of philosophy and theology studies. If he has not yet received an undergraduate degree, he studies for that during this stage of formation as well. Others may begin graduate work in a field of specialization during these years.

Here’s a word from Connor Smith, SJ, a man who recently completed his first studies, sharing why he loves his Jesuit vocation.

Next, the Jesuit works for two or three years in a Jesuit secondary school, college, or other approved ministry while he lives in an apostolic Jesuit community. He functions as a working member of the Society while he continues spiritual and intellectual formation for later Jesuit life.

Here’s a video of Orlando Portalatin, SJ, one of our regents, sharing about the true freedom he has found in his Jesuit vocation.

A Jesuit scholastic preparing for priestly ministry moves next to theology studies, lasting three or four years. He engages in his immediate preparation for ordination, first to the transitional diaconate and then to the priesthood. After ordination he is assigned to full-time apostolic work or specialized studies.

Men who desire to serve as Jesuit brothers engage in a shorter time of theology studies. Their training will also be focused on preparation for one or another specific apostolate mission.

After theology and some years of ministry as a priest or brother, the Jesuit renews his formation during some months of prayer, reflection and study of Jesuit history and rule. During this time of reaffirmation, the Jesuit will again make the full Spiritual Exercises and engage in some ministry with the poor or marginalized. After tertianship, a Jesuit may be called to full incorporation into the order and pronounce his final vows.

Read more about the many gifts and joys of our Jesuit men in formation in by clicking on their images below. 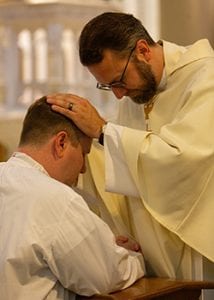 To discern our personal vocation, we have to realize that it is a calling from a friend, who is Jesus. When we give something to our friends, we give them the best we have. … A vocation, while a gift, will undoubtedly also be demanding. God’s gifts are interactive; to enjoy them we have to be ready to take risks.