Here’s a video of Bryan, in Spanish, sharing what he loves about his Jesuit vocation, followed by a profile piece, in English.

Grateful for the Invitation

Deo Gratias. Thanks be to God.

These words flow easily from Bryan Riquel Torres Santiago, SJ, because they are at the core of his vocation and his life.

Torres, who entered the Society of Jesus in 2017, recently completed his first year of philosophy studies at the Instituto Tecnológico y de Estudios Superiores de Occidente (ITESO), a Jesuit university in Guadalajara, Mexico. He describes his assignment to Guadalajara for First Studies as both a challenge and a grace.

“Even though, it is a Jesuit formation house, it did feel new and different in some ways,” he said. “The Society has a universal way of proceeding that unites all of us, regardless of where you are, but it looks different in each province. So, this new ‘Jesuit culture’ was at first difficult to transition to. Now I consider it more of a grace than a challenge, for it has opened my eyes and heart to the universality of the Church expressed in the universal Society of Jesus, and the distinct ways Jesuits experience and follow Christ.”

Born and raised in Ponce, Puerto Rico, Torres first began to discern his vocation to the priesthood at the age of 17 during Eucharistic Adoration. “I’m definitely not a mystic, but I clearly heard a voice inside me,” he says. “I felt this invitation to follow Christ.” This moment reminded him of the scripture passage about St. Matthew’s call: Come, follow me. “Except I didn’t respond right away.”

Instead, he attended Pennsylvania State University. “As time passed, I kept hearing the invitation,” he says. “It wasn’t an imposition, but an invitation to something I desired deeply.” By his senior year in college, he knew he wanted to become a priest, but he had to decide how and where.

Enter Pope Francis, the first Jesuit pope, doing new things and old things differently. Torres decided to learn more about the Jesuits. So, he went to the source, the Formula of the Institute, written by St. Ignatius Loyola in 1540. And he knew this was the group for him.

“The Formula of the Institute essentially lays out a program of mercy,” Torres says. “It is a synthesis of the life of Jesus, who carried out both the corporal and the spiritual works of mercy. That’s what the Society of Jesus does, and that’s the life I want.”

As part of his novitiate training, Torres served at the Fe y Alegria school in Santa María Chiquimula, Guatemala. The Jesuit parish there, in addition to its ordinary sacramental ministry and supporting the school, provides adult education, water projects, student housing and more.

“During my time in Guatemala, I learned about inculturation, how to preach Christ in a way that’s familiar to the hearer,” Torres said. “It helped me to see a new face of Christ, and a new face of the Church.”

His current ministry is teaching “survival English” and organizing faith-sharing activities in a migrant shelter in Guadalajara. “Being in direct contact with migrants is both profound and heartbreaking,” he says. “It can be tough to hear their stories, but mine is a ministry of presence. It’s important for me to just be there and listen.”

Torres is grateful for the opportunity to study and serve in Latin America. He is even more grateful that God has called him to this life. 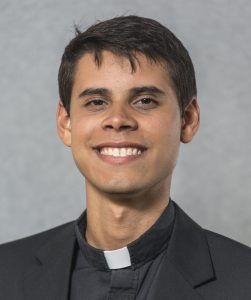 “The Formula of the Institute essentially lays out a program of mercy. It is a synthesis of the life of Jesus, who carried out both the corporal and the spiritual works of mercy. That’s what the Society of Jesus does, and that’s the life I want.”