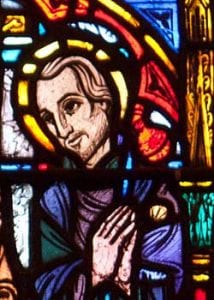 Iñigo López de Loyola, who later took the name Ignatius, was the youngest son of a noble family in the mountainous Basque region of northern Spain. Trained in the worldly manner at the court of King Ferdinand, Iñigo dreamed of the glories of knighthood and wore his sword and breastplate with a proud arrogance. He was far from saintly during much of his young adult life.

When he was born in 1491, the Middle Ages were coming to a close and Europe was entering the Renaissance. So he was a man on the edge of two worlds.

Europe of the late 15th century was a world of discovery and invention. European explorers sailed west to the Americas and south to Africa, and scholars uncovered the buried civilizations of Greece and Rome. The printing press fed a new hunger for knowledge among a growing middle class. It was the end of chivalry and the rise of a new humanism. It was a time of radical change, social upheaval and war.

In a quixotic attempt to defend the border fortress of Pamplona against the superior French artillery in 1521, Iñigo’s right leg was shattered by a cannon ball. His French captors, impressed by his courage, carried him on a litter across the mountains to his family home at Loyola. Doctors there broke and reset his leg, without much hope of saving his life. But he survived the trauma and began a long convalescence during which he was bedridden.

Iñigo whiled away the hours reading the few books his family was privileged to have. He asked for books about chivalry, but had to settle for biographies of the saints. In the course of his convalescence, he had a series of experiences of the immediacy and the love of God that completely changed his life. During his daydreams, he thought of great feats of arms and winning the approval the people at court. Then he would daydream about doing great things for God. Finally, he began asking himself, “What is the result of those daydreams?” Some left him feeling at peace and contented; others left him disquiet and uneasy.

To the dismay of his family, the young courtier conceived a plan of going to Jerusalem as a poor pilgrim. He left his home knowing little about what was to be done. His simple thought was, “If St. Francis or St. Dominic could do this or that, then I can do the same.” He made a solemn vigil at the Benedictine monastery at Montserrat and left his fine clothing and sword there, putting on instead the rough cloth of a pilgrim. When he left the monastery, though, he made what he assumed would be a brief stop at Manresa, a small industrial town in the valley below the mountain.

Iñigo stayed at a hospice in Manresa for almost a year. It was a time of intense prayer and self-examination, of struggling against the sinfulness of his earlier life at court. He discovered that he could talk to people about prayer and engage their own faith. These conversations and his own notes about his experiences formed the foundation for what would eventually be known as the “Spiritual Exercises.”

The point of the Exercises is freedom: how do I become free in accord with my talents and limitations? How do I become free enough to respond to the grace of God? The crux of the Ignatian vision is a spiritual humanism that is at once worldly and warmly human. It is a religious outlook on life that sees God immersed deeply in all creation and all human endeavor. It takes for its own the words of the poet Terence, “Nothing human is strange to me,” because nothing is merely human.

Download a pdf of the Life of St. Ignatius.

Fr. Rafael Garcia, SJ, Fulfills Vocation in Ministry with Migrants
After working his way to professional success as an architect, Fr. Rafael Garcia, SJ, found that his true calling in life is ministering to immigrant communities with needs similar to the one he grew up in.
Story
Justin Daffron, SJ: At the Service of Mission
Every baseball fan knows the value of a good utility player. For the Jesuits, Fr. Justin Daffron, SJ, has proved himself to be an outstanding utility player, serving in disparate roles at Jesuit universities in Chicago, St. Louis and New Orleans.
Story
How do we respond to the cry of the poor?
Father Provincial Thomas P. Greene, SJ, recently visited the migrant camp in Matamoros, Mexico. He came away inspired and committed to finding a way to help.
Story
Scroll to Top
X
Tweet
Share
Pin