Here’s a video of William sharing what he loves about his Jesuit vocation, followed by a profile piece: 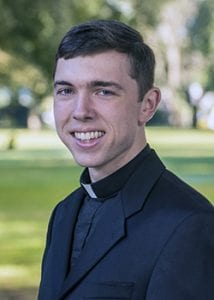 One Jesuit’s Journey to First Vows

(2016) When Robert and Melissa Manaker began their married life they were certain of two things. First, they would have to travel, since Robert served in the United States Air Force as a doctor specializing in family medicine. (Robert would eventually attain the rank of Colonel.) Second, they would make their Catholic faith the bedrock of their family, knowing that if they were blessed with children they would have to relocate frequently, make new friends and form new bonds.

Melissa explains, “We wanted them to grow up knowing that no matter what else was going on in their lives, family and faith were constants. Cities and schools might change but the two pillars were always in place.”

The Manakers were indeed blessed, first with son William in 1991, followed by daughter Madeline who was born in 1994. William was actually born in the United Kingdom while his father served at a U.S. Air Force base in Alconbury, England about a 90-minute drive north of London.

Upon their return to the States, the Manakers settled into the routine of most military families, with frequent moves and new towns. Robert says such moves rarely bothered William: “He just took it all in stride. He had the ability to introduce himself to someone new with the understanding that he was about to become their new best friend.”

Like so many before him, William’s journey to the Society of Jesus was somewhat circuitous. In fact, for his second grade schooling his parents were forced to enroll him in the First Baptist School of Alexandria because there were no openings at the local Catholic school. Melissa, who is a school teacher herself, believes his second grade teacher was his toughest ever and that includes the two years (5thgrade and 8th grade) when she taught William herself. Mrs. Manaker now serves as assistant principal at St. Rita Catholic School in Alexandria, Virginia.

William began to discern life as a priest while still in middle school. As he recounts his journey, he says, “When I was in 7th grade a priest from our school spoke about vocations one day during his homily. Afterwards, I found myself asking, ‘What about the priesthood?’  At first, I just ignored the question, because I thought the answer was clearly ‘no.’  But when the question kept coming back, I realized I had to take it seriously.”

William attended Thomas Jefferson High School for Science and Technology in Alexandria, Virginia. In addition to his studies he played violin and ran cross-country and track. He continues to pursue both passions. Following high school, William attended the University of St. Thomas in St. Paul, Minnesota. There were two events during his time at St. Thomas that started William down the Jesuit path. During his sophomore year, William spent two semesters studying in Rome, where he met Fr. Joseph Carola, SJ, who was serving as the chaplain for the St. Thomas students in the Catholic Studies Rome program.

The second major influence came from one of William’s Catholic Studies professors at St. Thomas.  William tells of how the professor asked him what he planned to do after graduation.  As he explained that he still heard a voice encouraging him to explore life as a priest, the professor suggested he investigate the Society of Jesus.  Up until then, William had been thinking about becoming a diocesan priest. His professor told William of a blog written by several young Jesuits, including Frs. Nathan O’Halloran and Aaron Pidel, SJ, entitled Whosoever Desires.  William read it and became more intrigued by the possibility of life as a Jesuit.  After visiting the Jesuit community in Tampa, Florida, and attending a discernment retreat, he began his application to enter the Society of Jesus.  Upon his graduation from the University of St. Thomas he entered the Novitiate at St. Charles College in Grand Coteau, Louisiana.

William took his First Vows on Saturday, August 13, 2016. In addition to his family and numerous other Jesuits, two men who entered the Novitiate with William (but ultimately discerned another path) were present.  As his time at St. Charles College draws to a close William looks back on his time with great fondness.  “I have always enjoyed how peaceful a setting it is here,” he says.  “This is a sacred place, because this is where my Jesuit life began—and the same is true for so many others.  It really has become home.”

One such experience William recounts is a program started by Novice Master Fr. Mark Thibodeaux, SJ. He instituted the “Spiritual Grandfather Program,” in which a novice is paired with an older Jesuit living at the Pavilion in Grand Coteau. William says, “My spiritual grandfather was Brother Joe Martin, SJ. It was a gift to be able to spend time with him during my novitiate.  The men in the Pavilion at Grand Coteau are a great witness to us young Jesuits.  One Jesuit that has particularly made an impact is Fr. Raymond Fitzgerald, SJ. He has been an inspiration to us.” (Fr. Fitzgerald was diagnosed with ALS, Lou Gehrig’s Disease, two years ago and his illness has created significant physical challenges for him, but it has not diminished his spirit.)

William’s journey will next take him to Loyola University Chicago for studies in philosophy. When asked what he might like to do in the future, he smiles the same warm smile shared by everyone in his family and says, “Well one thing I have learned for sure is that I will go wherever I am asked to go by Father Provincial. But as I reflect on all the possibilities, teaching and missionary work are areas that I find intriguing.”