Fr. Cazayoux was born to James Numa Cazayoux and Mable Inez Decuir Cazayoux, on Jan. 5, 1930, in Baton Rouge, Louisiana. In addition to his parents, he was preceded in death by his brothers James Numa, Jr. and Joseph Eugene (Bro. Cosmas, S.C.) and his sisters, Vivian Blanche Cazayoux, Olivia H. O’Connor and Clara Adelaide Bondy. He is survived by his brothers, Francis Trudeau and Robert Vincent Cazayoux and his brothers in the Society of Jesus.

After graduation from Catholic High School in Baton Rouge, he attended Louisiana State University for two years before entering the Society of Jesus (the Jesuits) on July 30, 1949 at St. Charles College in Grand Coteau. Following First Vows he studied humanities in Grand Coteau, then attended Spring Hill College in Mobile, Alabama, earning a B.S. in chemistry (1955) and completing the philosophy courses required by the Jesuits. He then volunteered for the former New Orleans Province Mission in what is today Siri Lanka. After a year of language studies, he studied theology at St. Mary’s in Kurseong, India. He completed a master’s in chemistry in 1970 at Louisiana State University.

He was ordained to the priesthood on March 25, 1962, at St. Michael’s College in Batticaloa, Sri Lanka.

While he was still in formation, Fr. Cazayoux traveled as a missionary to what was then called Ceylon (now Sri Lanka), which had been the mission of the New Orleans Province since the 1930s. Later, after returning to the United States to obtain a graduate degree, the political situation would not allow him to return. He was then assigned to teach high school, first at Jesuit High in New Orleans (1970-72) and then at Strake Jesuit College Preparatory in Houston (1972-75), but a high school classroom did not make the most of his talents.

Having served as a prison chaplain in Baton Rouge during his graduate studies, he found himself more suited to chaplaincy and pastoral work. For eleven years (1976-87) he was chaplain at Southeast Louisiana State Hospital in Mandeville, La. He then served two years as associate director at Ignatius Retreat House in Atlanta.

He retired to a ministry of prayer in 2010, first at Ignatius Residence in New Orleans and then to the St. Alphonsus Rodriguez Pavilion in Grand Coteau.

Fr. Cazayoux was particularly good at the kind of accompaniment required of a chaplain, whether at a correctional facility, a mental health facility or with elder Jesuits in their final years. He was very conscious that in his pastoral ministry, he received at least as much as he gave. This sense is captured in a message that he once wrote to those he served: “May Christ touch your lives with his love as he as touched mine through you.” 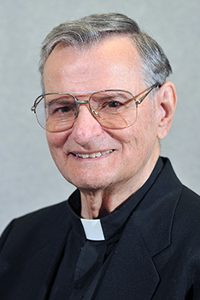