Remembered by his brother Jesuits and colleagues for his faithfulness, Fr. Byrne’s life will be celebrated in a Mass of Christian Burial at 7:15 p.m. on Monday, Feb. 3, at St. Francis Xavier College Church in St. Louis. The visitation will be the same day, beginning at 4:30 p.m. in the same location. Burial will follow at Calvary Cemetery in St. Louis at 9:00 a.m. on Tuesday, Feb. 4, with the procession leaving College Church at 8:30 a.m.

A memorial service will also be held at St. Francis Xavier Church in Kansas City, where Fr. Byrne served for many years. The service will be 11:00 a.m. Saturday, Feb. 22, 2019.

Luke J. Byrne was born May 5, 1935, in Kansas City, Mo., one of four sons of Luke J. and Catherine Byrne, all of whom predeceased him. He is survived by several nieces and nephews and cousins, as well as his brothers in the Society of Jesus, which he entered Aug. 17, 1952 in Florissant, Mo., following his graduation from Rockhurst High School in Kansas City.

Upon completion of the novitiate and seminary in Florissant, he went to Saint Louis University to earn a bachelor’s degree and a licentiate in philosophy. He then taught Latin and English at Kapaun High School in Wichita, Kansas, from 1959-1962, before earning his Master’s in liturgy and religious education from the University of Notre Dame.

Following ordination and the completion of his theology studies, Fr. Byrne returned to Kapaun from 1967-1970 as a religion teacher. He then served as pastor of St. Francis Xavier Jesuit Parish in Kansas City from 1970-75, after which he spent five years as president of Rockhurst High School, the Jesuit high school in Kansas City. He was the second alumnus of Rockhurst High School to serve as its president.

Father Byrne served in province administration in St. Louis as the provincial assistant for pastoral and international ministries from 1980-85. After a brief sabbatical, he returned to Kansas City, where he served on the Commission for Priestly Life & Ministry for the Kansas City – St. Joseph, Mo. Diocese from 1986 to 1991.

In 1991, he began ministry as a retreat director at White House Jesuit Retreat in St. Louis. He remained in St. Louis for seven years before again returning to Kansas City, this time to Rockhurst University, as co-director of campus ministry. He then spent 15 years as the university chaplain. The soccer field at Rockhurst University is named in Fr. Byrne’s honor and he is a member of the university’s Sports Hall of Fame.

He returned to St. Louis for his final assignment, that of praying for the Church and the Society, in 2015.

Father Byrne’s great joy was to celebrate the Sacraments with the faithful, especially among young people.

Memorial gifts may be made to the Rev. Luke J. Bryne, SJ ’52 Memorial Scholarship Fund at Rockhurst High School or the USA Central and Southern Province of the Society of Jesus. The high school’s mailing address is 9301 State Line Road, Kansas City, MO 64114 or donate online. The province mailing address is 4511 West Pine Blvd., St. Louis, MO 63108 or online through this website. 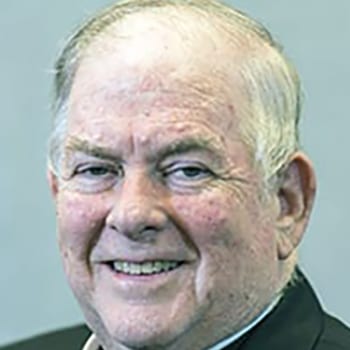