Father Kissinger’s long life of service will be celebrated in a Mass of Christian Burial at 11:00 a.m., Thursday, March 12, 2020, in the Domestic Chapel at St. Charles College in Grand Coteau. The visitation will be the same day, beginning at 10:30 a.m. in the same location. Burial will follow at the Jesuit Cemetery at St. Charles College.

Born in New Orleans, on June 14, 1915, he was one of two sons of Victor and Anna Thomas Kissinger. In addition to his parents, he was preceded in death by his brother, Victor Kissinger, Jr. He is survived by his nephew, Victor Kissinger, III, of Metairie, La., and his brothers in the Society of Jesus.

Father Kissinger’s mother died of Spanish flu during the 1918 pandemic, when he was three years old, and he went to live with an aunt. He attended Holy Cross High School, run by the Holy Cross Brothers.

In 1934, he went to the University of Notre Dame on a football scholarship. After one year, he decided he was too small to ever make the varsity team, so he returned home to New Orleans and got a football scholarship to Loyola University, where he earned a B.S. in chemistry in 1941. Raised a Lutheran, he was baptized Catholic on Christmas Eve of 1940.

By the time of his conversion to Catholicism, Fr. Kissinger felt called to be a Jesuit. He entered the Society on March 15, 1942, at Grand Coteau. At 27, he was considered a “late vocation” for those times. He pronounced First Vows on March 31, 1944. After studies at St. Charles College and philosophy at Spring Hill College in Mobile, Ala., he taught at Jesuit High School in Tampa, Fla., 1948-50. He studied theology at St. Mary’s College in St. Marys, Kansas, and was ordained to the priesthood on June 17, 1953, at Spring Hill College. He pronounced Final Vows in the Society of Jesus on Aug. 15, 1961, at Sacred Heart Church in Tampa.

Except for one year as assistant principal at Jesuit College Preparatory School of Dallas (1955-56), Fr. Kissinger’s entire priestly career was spent in pastoral ministries, either at parishes or in retreat houses. He served in Jesuit parishes in Key West, Fla.; Tampa, Dallas and Shreveport, La.; as well as at Manresa House of Retreats in Convent, La.; Montserrat Retreat House in Lake Dallas, Texas; Immacolata Retreat House in Liberty, Mo.; and Our Lady of the Oaks in Grand Coteau.

From 1988 to 2002 he resided at Jesuit High School in Tampa, giving retreats and doing parish and radio ministry. In addition to his retreat work, he was a prolific writer, with at least eight pamphlets published by Liguori Publications. He began the newsletter at Manresa, and in recent years made use of the Internet to post podcasts, homilies and prayer and retreat materials. His blog can be found at www.frksj.org.

Rodney retired from full-time ministry in 2002, when he was 87 years old. He moved to Grand Coteau in 2013 when the Jesuit retirement community, the Alphonsus Rodriguez Pavilion, opened. He continued to stay active, first by being an auxiliary chaplain at the Mary Joseph Home and at Our Lady of Wisdom Health Care Center, and then continuing his retreat work by phone or over the internet during his years in Grand Coteau. He remained clear-headed until the end.

We remember with gratitude all that God has done through his life of service to God and God’s people.

Gifts in memory of Fr. Kissinger may be made to the USA Central and Southern Province of the Society of Jesus at 4511 West Pine Blvd., St. Louis, MO 63108 or through this website. 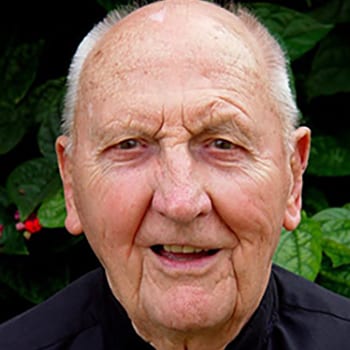