Remembered by his Jesuit brothers as a beloved teacher and a deeply spiritual man, Fr. Martin’s life will be celebrated in a Mass of Christian Burial at 11:00 a.m. on Friday, April 8, 2022, in the Domestic Chapel of St. Charles College in Grand Coteau. There will be a visitation immediately beforehand in the same location, beginning at 10:30 a.m. Burial will be in the St. Charles College cemetery following the Mass. Only those who have received the COVID vaccine and booster may attend the visitation and Mass; all are welcome at the gravesite.

Don Martin was born in New Orleans on Dec. 11, 1931, to Earle N. and Annie Marie LeBlanc Martin. In addition to his parents, he was preceded in death by his sister, Helena, and his brothers, Earle Jr. and Marius Martin. He is survived by his nephew Mark Martin and niece Lynn Johnston.

He graduated from Jesuit High School in New Orleans in 1949, and on Aug. 14 of that same year he entered the Jesuit novitiate at St. Charles College in Grand Coteau. He pronounced first vows on August 15, 1951. He was ordained to the priesthood on June 13, 1962, at St. Joseph’s Chapel on the campus of Spring Hill College in Mobile, Ala. He pronounced his final vows in the Society of Jesus at Spring Hill College on Aug. 15, 1966.

As a young Jesuit, Fr. Martin had several short-term assignments. From 1956 to 1959, he taught at Jesuit High School in Tampa, Fla. From 1963 to 1964 he was an instructor of theology at Loyola University in New Orleans, and the following year, he was a retreat director at Ignatius House Jesuit Retreat Center in Atlanta.

In 1966, he was missioned to Spring Hill College as a theology instructor. At the conclusion of that first year, the student body selected him as Teacher of the Year. In 1967, he was appointed the rector of the Jesuit House of Studies on the campus of Spring Hill College, where he oversaw a community of 86 men, with 67 Jesuits studying philosophy.

After time away from teaching while he earned his Ph.D., he returned to Spring Hill as an assistant professor of theology, serving there from 1973 until 1978. In 1978, he moved to New Orleans as an associate professor of theology in Loyola University’s Catechetical and Pastoral Institute. He then served for two years as associate pastor of Holy Name of Jesus Church on the Loyola Campus.

In 1984, he began teaching theology at the Archdiocese of New Orleans’ major seminary, Notre Dame Seminary. He remained there until 1996.

Beginning in 1993, Fr. Martin served the New Orleans Province as provincial assistant for parishes. He served in this role full time from 1996 to 2000.

In 2000, he returned to Notre Dame Seminary as a professor of liturgy and sacramental theology, which he continued until 2012, when he retired from full-time teaching and became an adjunct spiritual director to the seminarians.

Health issues required Fr. Martin to move to the Jesuit infirmary in Grand Coteau in July 2019.

Father Martin’s great love was liturgy, particularly the history and theology of liturgy. While he read all kinds of material, he was more interested in teaching than in research. He thoroughly enjoyed his interactions with students.

He loved telling stories and was a skilled raconteur, often directing the humor at his own foibles. He considered his Jesuit vocation his greatest gift.

Father Martin earned a bachelor’s degree in physics at Spring Hill College and a licentiate in Sacred Theology from St. Mary’s College in Kansas. He completed his Ph.D. in liturgy at the University of Notre Dame.

We remember with gratitude all that God has done through Fr. Martin’s life of service to God and God’s people. 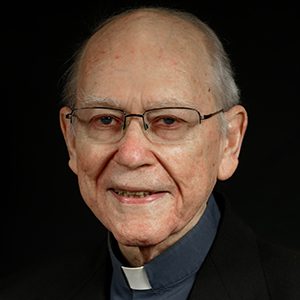