An internationally recognized scholar and author, he served for 28 years as director and editor of the Institute of Jesuit Sources and is considered an authority on the history of the Society of Jesus and Jesuit education.

John Padberg was born in St. Louis on May 22, 1926, to John Francis and Emily C. Albrecht Padberg. In addition to his parents, he was predeceased by his brothers William H. Padberg and Charles Padberg, and his sisters Sr. Mary Frances Padberg, SSND, and Sr. Marie Xavier Padberg, SSND. He is survived by a sister, Carol J. Padberg, and a sister-in-law, Rosemary Padberg, a nephew, John Padberg, three nieces: Christine Padberg, Emily Padberg and Elizabeth Danis, as well as cousins, many friends, students, and his brothers in the Society of Jesus.

John Padberg entered the Society of Jesus (the Jesuits) in 1944 after graduating from St. Louis University High School. He was ordained June 19, 1957 and pronounced final vows on Aug. 15, 1961.

Father Padberg was an exemplar of the Jesuit intellectual apostolate. He began in a classroom at St. Louis University High School, where he taught Greek, speech, and history 1951-53. Following his theology studies, he served as professor of history and academic vice president at Saint Louis University from 1964-73. He was a research associate at the Jesuit Conference of Canada and the United States, 1973-75. Then, from 1975 to 1985, he served as president of Weston Jesuit School of Theology, a national theological center in Cambridge, Mass.

While at Weston, he served as founding president of the International Conference of Catholic Theological Institutions. He also served as the editor of Studies in the Spirituality of Jesuits from 1986-2002, and as founding chairman of the National Seminar on Jesuit Higher Education and editor of its journal, Conversations on Jesuit Higher Education.

Father Padberg’s research and writing centered primarily around the history of the Society of Jesus. In addition to his publications, he lectured extensively about the history and spirituality of the Society of Jesus and Jesuit education. Over the years, he has given presentations at all 28 U.S. Jesuit colleges and universities and in the d’Arcy Lectures at Campion Hall at the University of Oxford.

He earned a Bachelor of Arts, licentiate in philosophy and Master of Arts from Saint Louis University. He did his theology studies at St. Mary’s College and St. Louis University and earned a doctorate in intellectual history and the history of ideas from Harvard University.

We remember with gratitude all that God has done through Fr. Padberg’s life of service to God, God’s people and the Society of Jesus. 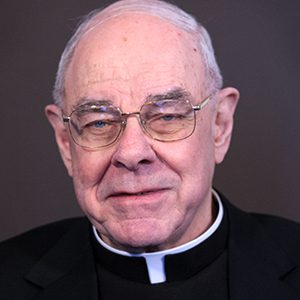