His memorial Mass will be celebrated on Monday, Jan. 18, 2021, in the Domestic Chapel of St. Charles College, with only the Jesuit Community in attendance because of the coronavirus restrictions. The graveside service and interment will be in the St. Charles College cemetery.

He was born in New Orleans on Sept. 16, 1928, to Herve and Mary Helen d’Aquin Racivitch, who preceded him in death. His father is recalled as the district attorney for New Orleans. Fr. Racivitch is survived by his sisters Barbara Ann (Mrs. Patrick J.) Butler and Judith Mary (Mrs. James) Setchell, as well as two nephews and five nieces.

After graduating from Warren Easton High School in 1943 at the age of 14, he attended Tulane University, receiving a B.A. in 1946, and then an LL.B. from the Tulane Law School in 1948. He was not quite 20 years old, and too young to sit for the Bar Exam.

Following ordination, he was sent to Jesuit High School in New Orleans to teach, 1963-64, and again in 1965 to 1971. He thrived at Jesuit High. He was a hard-working and excellent teacher, and many of his students, even years later, considered him the most brilliant and engaging teacher they had ever had. In presenting English literature, he provided cultural context by playing music in class and discussing the art of the period. His commentary on the primary and secondary works of an era prompted many students to find and read other literature beyond the required texts. His enormous vocabulary, his facility of expression, his cultural refinement and his spectacular skill for construction and analysis of argumentation made him an incredibly stimulating teacher.

Father Racivitch suffered from chronic, debilitating depression throughout much of his adult life. For a time in the ′70s and ′80s, he lived in New Orleans with family. In 1988, he rejoined the Jesuit community at Ignatius Residence in New Orleans and moved with the community to the St. Alphonsus Rodriguez Pavilion in Grand Coteau in 2013.

Fr. Racivitch’s depression would occasionally lift, and flashes of his former self could be seen, with witty and insightful commentary on books, films, ideas or issues of the day. Our prayer is that he is now at peace with the Lord.

We remember with gratitude all that God has done through Hervé’s life of service to God and God’s people. 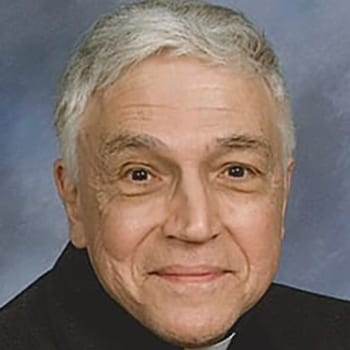