May 20, 2022 – Father Charles Thibodeaux, SJ, died Sunday, May 15, 2022, in Grand Coteau, La. He was 93 years old, a Jesuit for 75 years and a priest for almost 63 years. A missionary for nearly 40 years, Fr. Thibodeaux’s life will be celebrated in a Mass of Christian Burial on Saturday, May 21, 2022, at 10:30 a.m. in St. Charles Borromeo Church in Grand Coteau. A visitation will begin at 10:00 a.m. in the same location. Burial in the St. Charles College cemetery will immediately follow the Mass. Charles Blaise Thibodeaux was born Feb. 3, 1929, the Feast of St. Blaise, in Carencro, La., a small town between Lafayette and Grand Coteau. He was preceded in death by his parents, Lazaire J. and Agnes Stemmanns Thibodeaux, by his sisters Lucy Iskra, A.E. Darbonne, and Sr. Mary Vianney, MHS, and by his brothers Lazaire, Lawrence, and Andrew. He is survived by his brothers Ray and Francis, as well as by many nieces and nephews. Following his high school graduation, he traveled a little over five miles north of his hometown to enter the Jesuit novitiate at St. Charles College in Grand Coteau. He pronounced first vows there on July 31, 1948. After graduating from college in 1953, Fr. Thibodeaux taught at Jesuit High School in New Orleans until 1956. He then studied theology at St. Mary’s College in Kansas. On June 17, 1959, he was ordained to the priesthood at St. Joseph’s Chapel on the campus of Spring Hill College in Mobile, Ala. He pronounced his final vows at Grand Coteau on Aug. 15, 1976. Father Thibodeaux’s apostolic career after this was quite simple but very fruitful. His first assignment as a priest was to Sacred Heart Church in Grand Coteau, where he was assistant pastor 1961-71. In 1972, the parish was renamed St. Charles Borromeo, its original name until the 1870s, and Fr. Thibodeaux was named the new pastor. He stepped down as pastor in 1974 but remained as an associate. In 1980, the then-provincial of the New Orleans Province, Thomas Stahel, SJ, put out a call to the men of the province for volunteers to assist in the Province of Paraguay, which was sorely in need of help. Father Thibodeaux was among the four New Orleans Province Jesuits who were missioned to Paraguay, all of them at least 50 years old. Father Thibodeaux remained in Paraguay until 2019, devoting nearly 40 years of his life ministering primarily in the Misiones of San Ignacio and Santa Rosa to the economically poor, many of them Guarani Indians. Eventually health dictated that he stay in Louisiana. Nevertheless, his desire to return to Paraguay never dimmed. Father Oscar Martín, SJ, of the Paraguay Province, wrote a beautiful appreciation of Fr. Thibodeaux and his work among the people of the Misiones. One line seems to sum up his life and work: Incansable, atento, cercano a las necesidades espirituales y materiales de su gente, especialmente de los más pobres, a todos se entregó sin reserva. “Tireless, attentive, near to the spiritual and material necessities of his people, especially of the most poor, he handed himself over to all without reservation.” Father Thibodeaux earned a bachelor’s degree in Latin and philosophy at West Baden College in Indiana. We remember with gratitude all that God has done through Fr. Thibodeaux’s life of service to God and God’s people. Memorial gifts may be made to the USA Central and Southern Province of the Society of Jesus at 4511 West Pine Blvd., St. Louis, MO 63108. 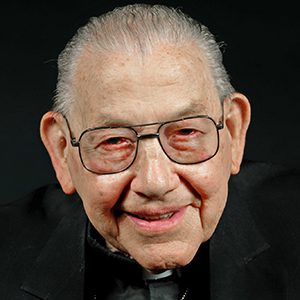