Aug. 11, 2021 – On Saturday, August 14, four novices of the Jesuits USA Central and Southern (UCS) Province will profess first vows of poverty, chastity and obedience in a special Eucharistic celebration at St. Charles Borromeo Church on the campus of St. Charles College in Grand Coteau, Louisiana.

Having completed two years at the novitiate of St. Stanislaus Kostka, Jesuits Giovanni Diaz Jimenez, Richard Joubert, Manuel Luna Vega and Joseph Seiter will pronounce their vows, making public their desire to live a lifetime commitment of serving Christ as members of the Society of Jesus.

The Mass will begin at 11:00 a.m. Central time and will be livestreamed here. 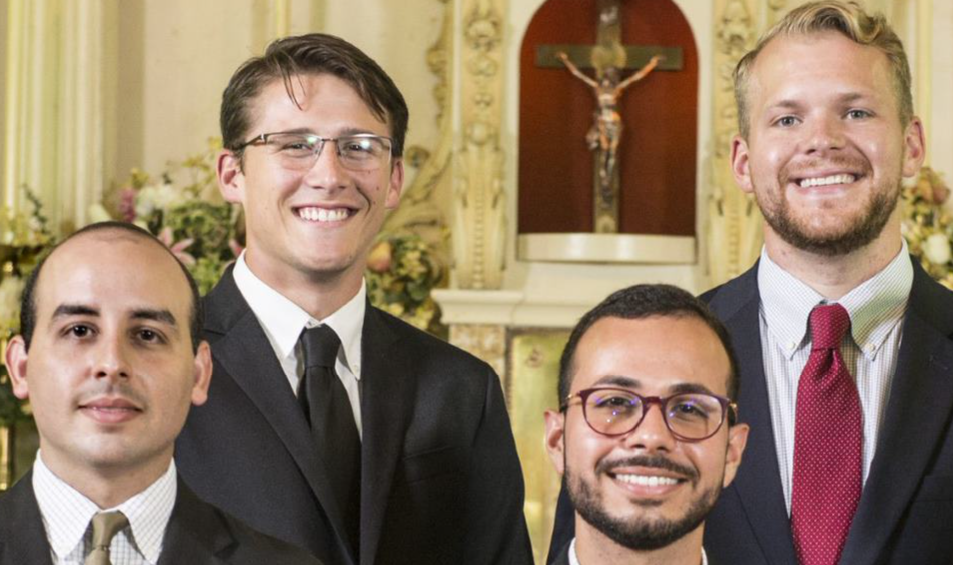 After years of contemplating and discerning their respective calls to the Society of Jesus, the four men entered the novitiate together in August 2019. A Jesuit’s two years at the novitiate usually include experiments in a variety of settings and locations. Due to the coronavirus pandemic, opportunities to serve demanded creativity in being attentive to the needs of the local community. While it might not have been what they expected, it provided them an enriching experience of growing closer to Christ.

“While the ‘adventure’ side of the novitiate might appear compromised with novitiate experiments discerned and missioned in the context of COVID-19 and the demand to mitigate risks to the more vulnerable around us, the goal of the novitiate is to form men to be available to go wherever God’s call demands,” said Fr. Drew Kirschman, SJ, director of novices.

“What better context to learn these fundamental dispositions of what it means to be a Jesuit in the world today?”

All four men served in various ways at local Jesuit parishes (St. Charles Borromeo in Grand Coteau and Immaculate Conception in Baton Rouge), a Jesuit grade school (St. Ignatius School in Grand Coteau), a nursing home (Our Lady of Prompt Succor in Opelousas), the St. Alphonsus Rodriguez Pavilion in Grand Coteau – where many senior and infirm Jesuits of our province reside – and the Thensted Center, a social outreach center in Grand Coteau sponsored in part by the UCS Province.

The time-honored tradition of novices learning the life through serving at Jesuit high schools around the province was kept intact despite the pandemic, with each man spending time at two or three schools.

As a missionary order, each man receives a cross during the First Vow Mass. Having prayed with what it means to accompany Christ crucified in the world today, each man discerns the vow cross he wishes to take, with many receiving one that once belonged to a now-deceased Jesuit. This discernment seeks to make explicit each man’s desire to follow in the footsteps of those who have gone before him as he begins his journey of religious life as a companion of Jesus. Giovanni Diaz Jimenez, SJ, a native of San Juan, Puerto Rico, completed degrees in philosophy and theology in Spain and Italy, respectively, prior to entering the Society. He then was involved as a youth tutor and instructor while pursuing an additional degree in his home city. As a novice, he worked at Cristo Rey Jesuit Preparatory in Houston and Jesuit High School in Tampa, Fla. He enjoys mountaineering and squash. Giovanni has been missioned to Saint Louis University for First Studies. Richard Joubert, SJ, is originally from New Orleans. After graduating from Saint Louis University, he was a member of the Alum Service Corps (ASC) program, serving Rockhurst High School in Kansas City before moving to California to teach theology at Xavier College Prep. As a novice, Richard served at Strake Jesuit College Preparatory in Houston and the Jesuit high school, Colegio San Ignacio and the Jesuit parish, Parroquia San Ignacio, in San Juan, P.R. He will attend Loyola University Chicago for the next phase of his Jesuit formation. In his free time, he likes to travel, hike and read. Manuel Luna Vega, SJ, hails from Aibonito, Puerto Rico. While attending Pontifical Catholic University in the city of Ponce, he learned more about the Society of Jesus. Prior to entering, he was a catechist and evangelist in Colombia. As a novice, he was missioned to St. Louis University High School in Saint Louis and Academia San Ignacio in San Juan, P.R. He enjoys chess, running and travel. He has been missioned to the ITESO, Universidad Jesuita de Guadalajara. Joseph Seiter, SJ, is from Mobile, Ala. He spent much of his youth and young adult years playing various sports. Prior to entering the Society of Jesus, he went on a pilgrimage to Spain and Italy in addition to cycling across Ireland. He also has experience assisting with the Life Teen program and has been on several mission trips. As a novice, he served at Rockhurst High School Kansas City, Mo., and Regis Jesuit High School in Aurora, Colo. He will attend Fordham University in the Bronx.

Having completed two years filled with discernment, prayer and service, these men are ready for the next step in the Jesuit formation process: first studies, with a focus on philosophy, the classics and social analysis at a Jesuit higher educational institution.

Please keep these men and all of our Jesuits in formation, as well as those discerning a possible Jesuit vocation, in your prayers.

Intellectual Rigor, Missionary Zeal Combine in Jesuit Vocation for Joshua Hinchie
Joshua Hinchie has found that intellectual depth and a missionary spirit are able to coexist within the Society of Jesus.
Story
Nine Men Enter the Novitiate
On Friday, Aug. 20, nine men entered the Society of Jesus at the Novitiate of St. Stanislaus Kostka in Grand Coteau, La.
News Story
Jonathon Polce, SJ: Following God’s Plan One Step at a Time
Jonathon Polce, SJ, seeks to follow God’s plan one step at a time.
Story