Readings of the Day

Jeremiah 31: 7-9 I will gather them from the ends of the world, with the blind and the lame in their midst.

Hebrews 5: 1-6. taken from among men . . . to offer gifts and sacrifices for sins. He is able to deal patiently with the ignorant and erring, for he himself is beset by weakness.

Did you hear what we just heard? I mean did you really hear it? 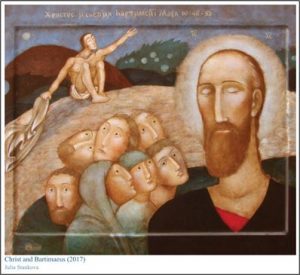 Sit with our brother Bart at the roadside listening to the world pass him by.
Be with him at the moment Jesus asks him “What do you want? seek? long for? dream about?

He was asking for nothing less than the miracle most of us enjoy every day.
He wants to see like we do. Think for a moment about what that means.

A miracle is not a quick solution to a problem; in Bartimaeus’s case, the miracle goes far beyond just the rods and cones of his retina being jolted back into doing what they were created to do. Rather a miracle is a door opening to opportunity. Perhaps he was hoping to see what people described to him as the blueness of the sky accented with a rainbow during a spring shower; maybe it was the deep greens of the summer forest; the range of red during autumn; the golden wheat fields ready for harvest. Perhaps he just wanted to see the face of his daughter for the first time.

Fortunately, that part of the Gospel story is left to our imagination. Let yourself step into that story and find out what happened to Bart. Spoiler alert!: It’s not as big a leap as we might think. We engage our imaginations all the time!

25, 50, 60, 75 years ago the jubilarians found themselves like Bartimaeus in a similar situation—engaging their imaginations, sorting through their desires, weighing their needs/possibilities. We all had an idea of what we were looking for. In retrospect those dreams were rudimentary. In reality, we each got so much more than we imagined. And today we gather to celebrate the progress, the development of, and the maturation of those dreams . . . including their bruises and scars.

As I was praying through the readings for today’s liturgy, I found myself recalling Luigi Pirandello’s play, Six Characters in Search of an Author, in which 6 characters crash a dress rehearsal of a play effectively re-writing the script. I like to think of the 39 of us who showed up at the novitiate 60 years ago in 1961 as 39 Players Looking for a Place in the Plot. The same goes for Jim Swetnam and Garth Hallett and their companions who began their journeys as Jesuits in 1945 and 1946. And Ian Gibbons and Jim Duffey who entered 25 years ago.

Most of our dreams were simple: priest, teacher, chaplain . . . Four of those 39 who entered in 1961, Tom Melancon, Jim Guyer, Glenn Mueller and myself, remain as Jesuits, many have “sought their salvation elsewhere” (a Jesuit euphemism for those not familiar with the phrase!); several who entered with us are deceased. All have been indelibly marked by their journey as Jesuits whether it was a brief stint or a lifelong run.

I’m assuming that something similar is true for all the others in this room as you stepped into your life with your own dreams of being father, mother, nurse, musician, scientist, engineer, . . .

Who are the 36 Jubilarians? What roles did we get in the plot?

Missionaries (in Central America and Alaska);

Administrators (Provincials and Province support staff, university and high school Presidents, Principals and Deans, those who have accompanied our infirm, prayed with the dying and buried our dead)

Authors and Editors; Directors of Theater, Radio and Television programming.

There is even a Physician, a Potter and an Alaskan Bush Pilot among the crowd.

Some became famous, some worked quietly behind the scenes, all gave of themselves totally to what they did.

Whether we are famous or infamous, the lives in which we have gotten ourselves caught up are as expansive as the scenes cascading from the baroque ceilings in the Church of Sant’ Ignazio and the Gesú in Rome. But the particular dream that drew us has had ramifications we probably didn’t expect, and that we don’t always talk about.

Back in 1975 or so, a 49-year-old Leo Weber (was he ever that young?) leaked a freshly written document to the novices in Kansas City. That document (formally known as Decree 2 from the 32nd General Congregation of the Society of Jesus) began by posing a simple question: “What is it to be a Jesuit?” The response bowled us over: “It is to know that one is a sinner, yet called to be a companion of Jesus as Ignatius was: Ignatius, who begged the Blessed Virgin to ‘place him with her Son,’ and who then saw the Father himself ask Jesus, carrying his Cross, to take this pilgrim into his company.”

Each of us is still unpacking that statement. It was stunning, shocking and proved to be painfully, exhilaratingly, humblingly prophetic.

That statement connects us back to Bartimaeus and his miracle. “We want to see” is a most dangerous response to Jesus’ simple, open-ended question. And asking the question “What is it to be a Jesuit?” is just as dangerous. It sets us up to see so much: Beyond inviting us to honestly acknowledge our own sinfulness, it makes us vulnerable to the demands that other peoples’ vulnerabilities make on our time and energy. We must even allow ourselves to be embarrassed by our communal failures.

When we Jesuits found ourselves saying “I want to see what it is to be a Jesuit,” most likely the thought of the sexual abuse scandal or our province’s history of slaveholding did not cross our minds. But it is precisely to such realities that we must open our eyes so we can see they, too, are doors opening us to understanding, humility, compassion, reconciliation.

Anthony DeMello counsels: “Be grateful for your sins, they are carriers of grace.”

I like to think of all of life—the lingering past that dances with the ongoing present—as a range of sinful and sacramental moments.

A piece of calligraphy at a favorite retreat house where I have worked and rested proclaims: “To use a sacrament is to expose ourselves to the winds of change, to evince a willingness to be disturbed within and without ourselves by pressures we may not like.  Trust the slow work of God.”  — Artwork at Linwood Spiritual Center in New York

The editor in me wants to summarize/recast these statements and say: “Be grateful for everything, for all is grace.” So the overarching theme of today is Gratitude.

As homilist today I am taking the liberty to speak for and with the other jubilarians. Let me simply say: We are grateful . . .

For our parents, ancestors, siblings and the next generations that bring us delight . . .

For teachers, confreres, students whose pushed us to teach creatively beyond a set syllabus . . .

For those whom we perceived as weak, limited, and needy but who opened our eyes with their wisdom, insights, and unique experiences . . .

For nature, sunrises and sunsets, trees, flowers and wheat fields . . .

For liminal experiences that take us beyond our neighborhoods and over the horizon of our culture . . .

For the things that seem like roadblocks but open unexpected pathways. . .

For cannonballs (real ones and ones disguised as Franciscans or Dominicans) that messed with Ignatius’s dreams, refined them, and honed them . . .

For our mentors, provincials, classmates, and friends who saw something in each of us that we hadn’t yet noticed, and who had the patience to wait for us to discover that something . . . (I suspect that some of them are still interceding in God’s presence trusting that someday we will come to see!)

Gratitude in the words of the poet e e cummings sounds like this:

i thank You God for most this amazing
day:for the leaping greenly spirits of trees
and a blue true dream of sky;and for everything
which is natural which is infinite which is yes

(i who have died am alive again today,
and this is the sun’s birthday;this is the birth
day of life and of love and wings:and of the gay
great happening illimitably earth)

how should tasting touching hearing seeing
breathing any—lifted from the no
of all-nothing—human merely being
doubt unimaginable You?

Today’s celebration is not just about the jubilarians; it’s about all of us as we sit with Bartimaeus and agree: “We want to see!” May we continually be surprised by what we will see . . . and by the doors Jesus opens for us. 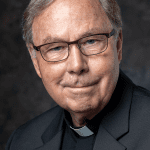