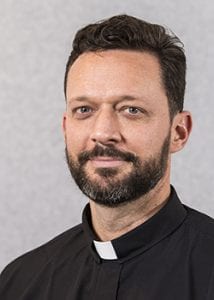 Father Johnathan “John” Brown, SJ, is the newest major gifts officer for Jesuit High School in New Orleans. With typical self-deprecating humor, he explains that his assignment requires him to “eat out a lot.” No need to worry about his waistline, though, as he says, “I lost about 40 pounds in Iraq, so this is helping me put it all back on. I’m almost back to my fighting weight!”

Father Brown was in Iraq last summer for his tertianship, the final stage of Jesuit formation. He spent about three months working as an education consultant in a refugee camp where the Jesuit Refugee Service works with internally displaced Iraqis. His job was to help the teachers – who are themselves refugees – understand the Ignatian Pedagogical Paradigm (IPP), the teaching method used in Jesuit schools that ensures the Jesuit identity of the school.

One of the first steps in the IPP is understanding where your students are coming from. In a refugee camp, they’re coming from a war zone. The camp is located in Kurdish territory and populated by Iraqis fleeing the Islamic State of Iraq and Syria, commonly known as ISIS. The first to arrive were the Christians, followed by moderate Muslims. Later, other Muslims came because they had to flee “Daesh” – their preferred word for ISIS or ISIL, because it does not give the violent militants credence by referring to them as a “state.”

The JRS school was open to people of all religious backgrounds.

As a good Jesuit, Fr. Brown is up to going anywhere, open to any assignment. But during his 30-day retreat last summer, he began to feel convinced that ministry in a secondary school was his calling. And then he was sent to Iraq, to work in a refugee camp.

“I felt completely useless,” he said, noting that he speaks none of the local languages. “The only thing I had to offer was my life. The Suscipe became very real to me. I knew I was ready to give my life for God’s sake.”

The people in the camp, especially the Christians, helped Fr. Brown make sense of the violence and destruction. “These people really understand the cross,” he said. “They helped me to grow spiritually.”

After nearly three months in Iraq, Fr. Brown has profound admiration for people who evangelize and who serve in the most dire situations. He also has a new appreciation for New Orleans and Jesuit High School. “After being in a refugee camp, it’s kind of hard to get too worked up about anything here,” he says.

Father Brown believes his job at Jesuit is to articulate the mission. “I love Jesuit High School, and I’m very proud of what other Jesuits have done here. I can sell what Jesuits and lay collaborators have been doing for 170 years because I really believe in the mission.

“The great thing about working in the high school is that I know the kids or grandkids of the people I talk to in my job. I always begin by thanking them, because the best thing you can give is your son.”

Father Brown served at Jesuit High School before his tertian assignment, but he’s a different man now. “My time in Iraq was absolutely life-changing,” he says. “I have really come to believe that grace, forgiveness, love and beauty will rule the day.”