Father Robert Murphy, SJ, knows firsthand how complex the vocations discernment process can be. He recognizes it is different for each person. By bringing his personal experiences and background to his new role as a vocation promoter for the Jesuits USA Central and Southern (UCS) Province, he believes he can help other men on their own journeys.

During his time at Jesuit High School in New Orleans, Murphy, a 1995 graduate, discerned between a Jesuit vocation or attending college.

He chose the latter, enrolling at the University of South Alabama and earning a physical therapy degree. After he graduated in 1999, he had a job, an apartment, bills to pay and eventually a serious relationship with a woman.

Still, Murphy made time for a faith life, leading retreats and helping as an assistant youth minister at his parish. After years of discernment, he entered the novitiate in Fall 2003.

According to Murphy, what seems like a long journey to the novitiate merely was God’s schedule, not his. That is why he feels uniquely qualified to connect with discerners in his new role.

“I understand that discernment is a long process, and guys may not know what God is calling them to right away,” he said.

After the novitiate, Murphy studied theology and philosophy at Saint Louis University, where he also completed his Doctor of Physical Therapy degree, another lived experience he feels he can use to connect with discerners.

“Guys may feel like a vocation is a binary choice. For me it would have been, okay, either be a Jesuit or be a physical therapist,” he said. “The truth is, I have used my physical therapy background in my Jesuit vocation quite a bit. So, it doesn’t have to be a choice of career or Jesuit vocation; they can coexist.”

After earning his master’s in divinity and Licentiate in Sacred Theology at Boston College, Murphy was ordained to the priesthood in 2014. He spent the next year in San Antonio, Texas, celebrating the sacraments in both English and Spanish at the then-Jesuit parish of Our Lady of Guadalupe.

Next, he returned to SLU, where he spent four years as a campus minister predominately at the health science campus.

Last fall, Murphy left for tertianship, the final stage of Jesuit formation, in which a Jesuit revisits Jesuit documents, makes a 30-day retreat and engages in apostolic ministry unlike his usual assignment. Unfortunately, his experience was cut short by COVID-19—what became an unexpected blessing. Upon his return to the U.S., Murphy was assigned to Jesuit Hall in St. Louis, where he provided physical therapy to residents, primarily senior or infirm Jesuits. Here, Murphy saw his vocation come full circle.

“It was very fulfilling to give back to my brother Jesuits in such a meaningful way,” he said. “Again, I was able to use my physical therapy background, showing that career can coexist in the context of a Jesuit vocation.”

After several months at Jesuit Hall, Murphy was assigned to his current role, a vocation promoter for the UCS Province. He believes this is a good fit for several reasons, chief among them the experience of his own discernment process.

“Pieces of my experience should be relatable to discerners,” he said. “Yes, I was Jesuit educated in high school, but I attended a large, secular university. I spent time in the working world. I paid bills, was in a serious romantic relationship, had an apartment. All these things can help me connect with guys in various stages of discernment.”

Second, Murphy is organized, thanks to his physical therapy background.

“In my work as a physical therapist, I worked with patients to create short- and long-term treatment goals,” he said.

Murphy enjoys developing individualized plans with patients and wants to do the same with discerners.

“While intense spiritual experiences can’t be ‘scheduled,’ what we can do is sit down and come up with short- and long-term goals for each man’s spiritual development, so he can get to a better place in his relationship with God, regardless of whether God ultimately calls him to a Jesuit vocation,” he said.

Working alongside Vocation Promoter Fr. Eddie Gros, SJ, and Vocation Director Fr. Michael Dooley, SJ, Murphy believes he can use his own discernment experience and physical therapy background to connect with discerners in a unique way.

He looks forward to giving back, since so many Jesuits helped him in his discernment process.

“I’m thankful for all the people who helped me on my discernment path, so I feel blessed that I can now return that favor by walking with young men on their path.” 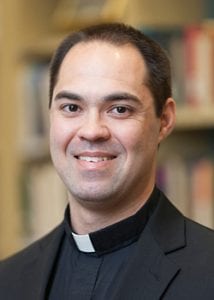 "I'm thankful for all the people who helped me on my discernment path, so I feel blessed that I can now return that favor by walking with young men on their path."