On the Road with Ignatius

Going on pilgrimage has a long tradition in Christianity. For centuries, Christians have wanted to walk in the footsteps of Christ and the saints and experience their lives in a concrete way. The hope is that as you see the reality of these holy lives, you gain a new way of living your own life.

The young priests of the Jesuits USA Central and Southern Province came this summer from assignments around the United States and beyond to Azpeitia, Spain – birthplace of St. Ignatius – to walk the Ignatian Camino, a pilgrimage based on the life of Ignatius.

On the first night of pilgrimage, we gathered in a circle with our guide, Fr. Jose Luis Iriberri, SJ, the Jesuit priest who had been instrumental in developing the Ignatian Camino. “Okay, Pilgrims!” as he would perpetually address us collectively. “Tell me why you are here: what grace do you seek on this pilgrimage?”

Each of us voiced desires for different graces, but underneath it all, we all wanted to encounter the life of St. Ignatius in a concrete way. We wanted to know the life of Ignatius and model our lives on his.

Our first two days were spent in Azpeitia. There, we saw where Ignatius spent his early years – the ancestral castle where he was born and would have played as a small child, the streets he walked and even the font where he was baptized.

After so many centuries, I was surprised that the baptismal font used for Ignatius was still preserved. Yet there it was in the parish church the Loyola family would have frequented for generations. On top of the font today is a statue of St. Ignatius holding a sign saying in Basque, “In this place, Ignatius was baptized.”

Having performed so many baptisms myself, it was easy to imagine baby Iñigo held over the font as the priest poured the water. It was a captivating image. How many future saints have I baptized? How will the graces of baptism take hold in their lives? How will the grace of baptism take hold in my own life? These are questions only God can answer for now.

As amazing as it was, seeing the baptismal font that morning turned out to be only a prelude to a much more powerful experience. That evening, our pilgrim group said Mass and renewed our vows in the room where Ignatius recovered from the wounds he received at the Battle of Pamplona and first turned to God – a room now called “The Chapel of the Conversion.” Next to the altar stood a statue depicting a wounded Ignatius laying on his sickbed, first considering God.

In spite of his baptism, Ignatius did not lead a particularly Christian life for his first 30 years. Yet on that bed, in the very room where I was saying Mass with my brother priests, he did finally embrace the promises of his baptism. It took time, but the graces of the sacrament eventually seized his soul.

Most of my active ministry as a Jesuit has been as a teacher, in either a high school or college. Teaching is fundamentally an act of trusting in God’s providence – hoping that God will take care of your students outside the classroom and one day guide them safe to heaven. Sometimes I see my students and wonder how they will fare, whether God’s grace will penetrate their hearts. Celebrating Mass in the Chapel of the Conversion, I saw that it might take time, but God’s grace will win.

“Okay, pilgrims, let’s go!” Jose Luis beckoned us in his perpetually cheerful manner. We hiked from Azpeitia and saw God on the path with Ignatius. In so many of the towns Ignatius visited on his own pilgrim journey, God showed his power clearly, especially through miracles and visions of the saints. Ignatius was one in a long line of mystics and wonderworkers.

As amazed as I was by how God was so palpably present among the people of northern Spain, I sometimes found myself wondering, “Where is God back home? Where are the miracles in America?” I got the beginnings of my answer on Day 3.

We hiked to Verdú, the hometown of St. Peter Claver, the famed Jesuit who declared himself “slave to the slaves” as he tended to the enslaved peoples in Cartagena, Colombia. His home had become a shrine, and we would spend the night there.

I was messaging with a friend from St. Louis that I was staying in the house of Peter Claver, and he excitedly messaged back, “You know he’s got a St. Louis connection, right?”

Texan though I am, I have quickly learned that everything, somehow, has a St. Louis connection, and so I asked him what Peter Claver’s was.

In 1861, a German immigrant to St. Louis had been badly injured while working in a factory. Every doctor pronounced the injury beyond their abilities, and it was presumed that the immigrant would die a painful death. A Jesuit priest was preaching a mission on then-Blessed Peter Claver at the Shrine of St. Joseph and was blessing all the sick who came to him with a relic of Claver. With his last ounce of strength, the wounded immigrant (helped by his wife) came to the shrine to be blessed by Claver.

Almost as soon as the immigrant kissed the relic, his wounds visibly began to heal. Within two weeks, he was completely cured. After an investigation by Rome, the healing was deemed a miracle through the intercession of Peter Claver, who was then proclaimed a saint of the Church.

I had spent days wondering where the miracles were in America, when it turns out a powerful miracle by a great Jesuit saint had happened in my own back yard. God is at work at this place where I slept while on pilgrimage, and God is at work in my home.

We continued our hikes over several days, Jose Luis continuing to beckon us with his call: “Okay, pilgrims, let’s go!” We continued the hikes knowing that the biggest ones were at the end: up to Montserrat and back.

Montserrat is a massive mountain range, so-called because the mountains have a serrated appearance, like a saw blade. The Shrine of Our Lady of Montserrat, where Ignatius placed his sword at the feet of Mary and pledged his service to Jesus, was at the top of these mountains.

Ignatius made the hike with a leg still hurting from his wounds at Pamplona. I had two healthy legs, but I was still tired by the end.

Being tired and sore made me even more impressed that Ignatius had kept an all-night vigil in his condition, before laying down his sword in service of Christ and His Kingdom. I was filled with an urge to see the statue of Our Lady where Ignatius prayed and see what had inspired him.

The statue itself sits inside a great basilica, the abbey church where Benedictine monks have prayed for more than 1,000 years. To see the statue, you go up several flights of stairs until you are at a balcony where Our Lady overlooks the whole interior. There, you have a moment to pray (though not too long, if there are other pilgrims waiting behind you).

Again and again, I got in line to see the statue. Everything about it captivated me. It reminded me of Ignatius’ own desire to visit repeatedly the site of Jesus’ Ascension, to see the direction Our Lord’s feet were pointed.

What struck me most was the joyful smile on the face of the Infant Jesus. When Ignatius swore his life to advancing Christ’s Kingdom, he swore obedience to a helpless child who was overjoyed to see him. This joyful Child Jesus is someone I can let into every crevice of my heart, and for whom I would happily lay down my life.

Late that night, we had the opportunity to say Mass together in a chapel of the basilica when other visitors had gone. Afterward, we heard the cheerful call of Jose Luis, “Okay, pilgrims!” He had an announcement: anyone who wanted to make one final visit to the statue of Our Lady could do so.

As I went to see Our Lady of Montserrat one last time, it dawned on me: this is where it happened. You hear the story of Ignatius laying down his sword from the minute you enter the Jesuits. Now, the story was finally registering as reality – a reality I wanted to be part of.

It was a surreal moment as I said Mass in this chapel with the other young priests of the province. I have often thought while saying Mass that I am doing what Ignatius did. As I said Mass in this chapel, it occurred to me that I was doing what Ignatius did, in the very space where he did so. It was a palpable connection between his life and mine.

Those palpable connections with Ignatius are among the things I savor most from the pilgrimage. I saw in Ignatius an example of how God can work in another person’s life and how he can work in mine. My Jesuit vows feel more substantial and prayer more powerful, seeing what grace can do in the life of one sinner named Ignatius. 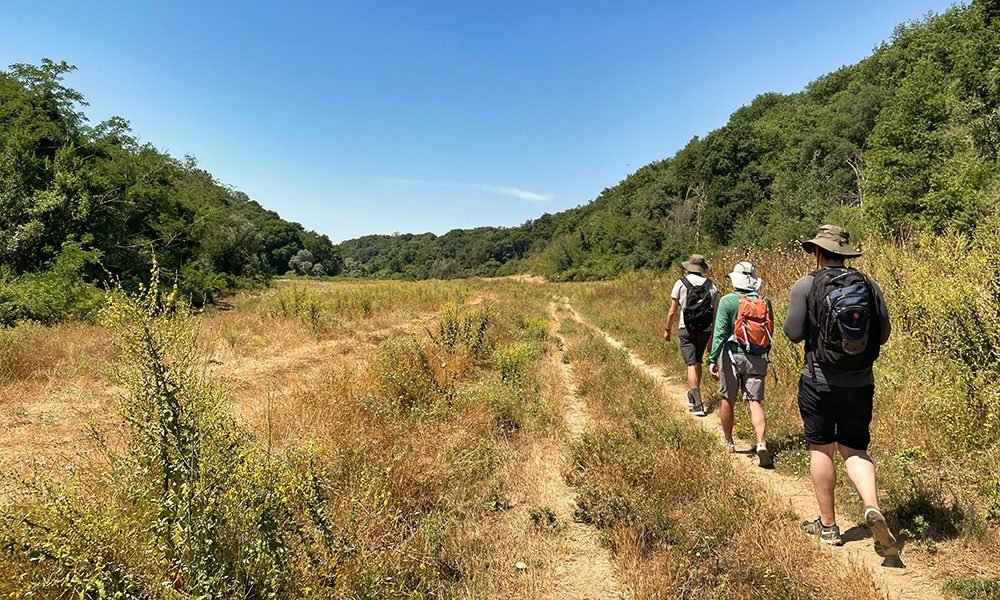