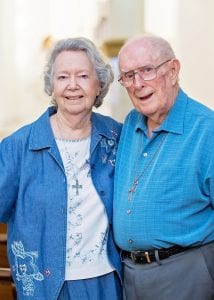 When Victor Muse’s family was in need, the Jesuits stepped in to help. Now, Mr. Muse spends much of his retired days returning the favor, donating his time and treasure to the formation fund and several apostolates of the Jesuits USA Central and Southern Province.

Muse enrolled at Jesuit College Preparatory School of Dallas in September 1942. In his freshman year, his father fell ill and was unable to continue his work as a rate clerk for the Southern Pacific Railroad. This predates paid sick leave, so his family suffered significant financial hardship.

Father Joseph Mulhern, SJ, who led the school at the time, allowed Muse to remain enrolled, despite his family’s inability to pay for the remainder of his education. This generosity was a catalyst for Muse’s prosperous future, and the main reason he feels a duty to repay that debt today.

“The four years at Jesuit were the most beneficial years of my life,” Muse said. “I have lived my life on what I learned during that time.”

Since Muse’s family could not afford to send him to college, upon his graduation from Dallas Jesuit, he began a long career at Armstrong Cork Company, where he worked as a quality control technician. Shortly after beginning his career, he married Margie Leverette. The couple had seven children and lived a busy life centered on feeding, clothing and educating their children. Muse also assumed ever-increasing responsibilities at Armstrong. There was little time to “give back.”

As his children grew, Muse found he had more time to invest himself in supporting the Jesuits, whose generosity opened so many doors for him. In 1964, he attended his first retreat at Montserrat Retreat House in Lake Dallas, Texas. He has been an annual attendee ever since. He fondly recalls his initial retreat as a great experience.

“The retreat master was Fr. Harold Gaudin, SJ,” he recalled. “He made me aware of how much God loved everyone.” Father Gaudin would remain a frequent presence at Montserrat for many years.

In 1972, Fr. George Wiltz, SJ, arrived at Montserrat and developed a close friendship with Mr. Muse, even saying Mass at the Muse family’s Thanksgiving celebration for many years. This tradition was passed down from one Jesuit to another and continued for each of the next 47 years. In 2020, the Muse family Thanksgiving was canceled due to concerns about COVID-19.

Mr. Muse retired in 1988 and felt an obligation to repay the Society for the generosity and compassion they showed his family in a time of financial need.

“Allowing me to continue at Jesuit without paying tuition was so generous that I felt it was time to pay them back,” he said.

The couple started a “Vic and Margie Muse” fund, which they use to contribute regularly to the province’s formation efforts. Their children, aware of the impact the Society had on their father, also contribute to the fund.

“I am now 93 and Margie is 88 and we will continue to contribute as long as we are alive,” he said.

Mr. Muse also finds time in retirement to get involved with the Dallas Jesuit Alumni Association. After years of selfless service to the organization, he received the “Brother Marshal Lapeyre Man for Others” award in 1999.

The Muses maintain close friendships with many Jesuits to this day, especially Frs. Ron Boudreaux and Anthony Borrow, former retreat directors at Montserrat. They particularly enjoy attending Jubilee celebrations in New Orleans for these men, most recently Frs. Joe Tetlow and John Stacer.

“We have been fortunate in being able to enjoy our Jesuit friends over the years: Frs. Jim Babb, Frank Coco, Neil Jarreau, Hooty McGown, Walt McCauley, Ed Romagosa and Bro. Marshal Lapeyre to name a few,” he said.