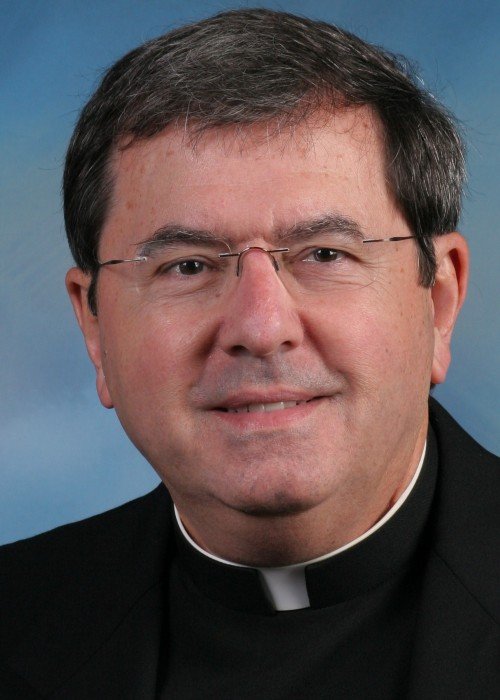 Father Paul Patin, SJ, entered the Society of Jesus at St. Charles College in Grand Coteau, La., on Aug. 14, 1961; this year he celebrates 60 years as a Jesuit. He has dedicated most of his active ministry to pastoral roles as pastor, chaplain and vicar. In his later years, he began a ministry of retreat direction.

Born in Breaux Bridge, La., in 1942, he attended the Catholic University of America in Washington, D.C., for a year before discerning a Jesuit vocation.

He began his ministry at Strake Jesuit College Preparatory of Houston, where he served from 1967 to 1976. Next, he was named an associate pastor and then pastor at St. Charles Borromeo Church in Grand Coteau, La., followed by a year at St John Berchmans Church in Shreveport, La.

After being certified and serving as a hospital chaplain, Fr. Patin returned to St. John Berchmans for a year, followed by five years at Holy Name of Jesus in New Orleans, both as associate pastor. An assignment as parochial vicar at St. Ignatius Loyola Parish in Houston followed, before returning to serve as pastor and superior at Holy Name in New Orleans for six years.

Beginning in 2003, Fr. Patin served as a retreat and/or spiritual director at Jesuit Spirituality Center in Grand Coteau, La., Our Lady of the Oaks Jesuit Retreat in Grand Coteau, Sacred Heart Retreat and Manresa House of Retreats in Convent, La.

Since July 2020, he has been a pastoral minister at St. Charles College in Grand Coteau, La.

Father Patin earned a bachelor’s degree in English education and philosophy from Spring Hill College in Mobile, Ala., a Master of Divinity in theology from Saint Louis University and a master’s degree in applied linguistics from the University of Texas.

Fr. Paul Patin’s Reflection on 60 Years as a Jesuit

I was born in 1942 in the small town of Acadiana, in the south-central part of Louisiana. After graduating from St Bernard School, Iattended Catholic University in Washington, D.C. During that time, I continued to feel a call to consider religious life and the priesthood. The focus gradually became clearer, and what it led me to was Jesuit life.

Formation for this Jesuit began in the Jesuit novitiate of the (former) New Orleans Province located in Grand Coteau. It was only about 20 miles from my hometown, so many people there knew of the Jesuits. My ministry as a priest began, and over the years involved work in Jesuit parishes, retreat houses and hospitals. Work in the hospital went along with a year’s formation in clinical pastoral education at the Texas Medical Center in Houston. During all of these ministries, I was growing in self-knowledge. This came sometimes when I was helping someone else discern God’s will for them.

St. Ignatius Loyola was a master of discernment of spirits. From his own experience he came to understand the movements that go on within: consolation that helps in moving toward God; and desolation, feelings or insights that tend to move one away from God.

I have found much to make me grateful in my life as a Jesuit. To help someone see more of God’s will gives much joy.  As I help others, I am blessed with some of the same interior graces that the directee is feeling.